Lord Shiva is regarded as a Supreme deity and the creator of the universe in Hinduism. Shiva Puran mentions that once Lord Brahma and Vishnu were fighting over ‘who’s the supreme being in the world’. To sort the issue, Shiva appeared in form of a huge pillar of light and asked the two Lords to find the end of the light stating that whoever will find the end will be the supreme one.

Brahma decided to go in upward direction of light and Vishnu chose to go down. After a while, both the deities appeared in front of Lord Shiva accepting their defeat but Brahma chose to lie and said he found the end. This made Lord Shiva furious and he cursed Brahma that he will not be worshipped till the end of the eternity and blessed Lord Vishnu for his piousness.

This pillar of radiance in which Lord Shiva manifested is called ‘Jyotirling’ where the supreme deity is worshipped in form of Lingam of Light. Although it is said that there are 64 such Jyotirlingas in India, but 12 of these are extremely important. There 12 Jyotirlingas in India are located in strategic location and Hindu devotes from across the country come to visit each one of them.

Apart from being spiritually important places, these sanctums are utterly peaceful. Just in case you happen to make a plan to embark on a spiritual odyssey, we would recommend that you start with these places and seek the blessings of the Lord.

Somnath temple is located in Veraval, Saurashtra region of Gujarat and is the first among the 12 Jyotirlinga. There are several stories associated with the temple of which one is of Moon God. As per Shiv Puran, moon was married to the 27 daughters of Daksha Prajapati but he was partial to Rohini, who was his favourite. He ignored his other wives. When Daksha came to know about how moon is treating his rest of the daughters, he cursed him to wane into nothingness. The moon then approached Lord Brahma who advised him to worship Lord Shiva. Impressed by moon’s penance, the supreme god then appeared in front of his and blessed him to grow and shine in the bright half. The moon got his lustre back and since then, the place where Lord appeared was called ‘Somnath’.

As history goes, the original Somnath temple was built by the moon in pure gold and later got revived by Ravana in silver, by Krishna in sandalwood and finally by Bhimadeva in stone. After that, the temple was plundered multiple times by Islamic invaders in the medieval centuries. The latest temple is made with reddish yellow stones and one can experience complete bliss when the gigantic waves of Arabian Sea hit the walls of the temple. 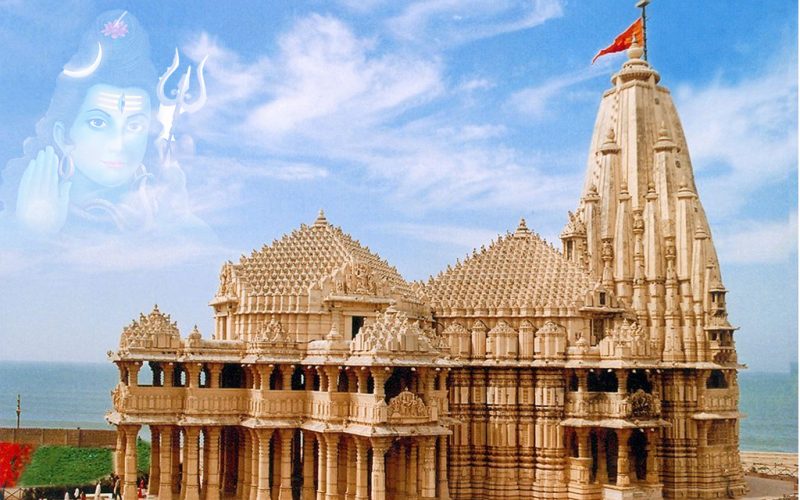 Located in Srisailam, Andhra Pradesh, Mallikarjun is another important Jyoitrlinga in Hinduism and revered as one of the most pious spot in the country where one glance at the Jyotirlinga can rid you of your sins and worries. The story behind this Jyotirlingam is quite interesting.

Legend has it, once Lord Ganesha and Lord Kartikeya went into a verbal fight about who will get to marry first. They both approached Lord Shiva and Goddess Parvati to solve the matter. Lord Shiva told them that whoever will take one complete rotation of earth will get married first. Lord Kartikeya went on the mission but Lord Ganesha encircled Lord Shiva and Goddess Parvati instead. Impressed by this, Mahadev (Lord Shiva) blessed Ganesha and married him off to Riddhi and Siddhi.

When Kartikeya was done encircling the earth, he came to his parents but was shocked to see that Ganesha had got married by then. Saddened by this, he went to Kraunch Mountain and made it his abode. Over time, he resisted interaction with his parents. One day, Mahadev and Parvati decided to meet Kartikeya in Kraunch Mountain. Hearing the arrival of his parents, Kartikeya fled to another place. At last, Lord Shiva took the form of Jyotirlinga and decided to live on that mountain by the name of Mallikarjuna. Ironically, this is also the place where a body part of Sati (reincarnated as Parvati) fell. Mallikarjun temple is both a Jyotirlingam and Shaktipeeth. 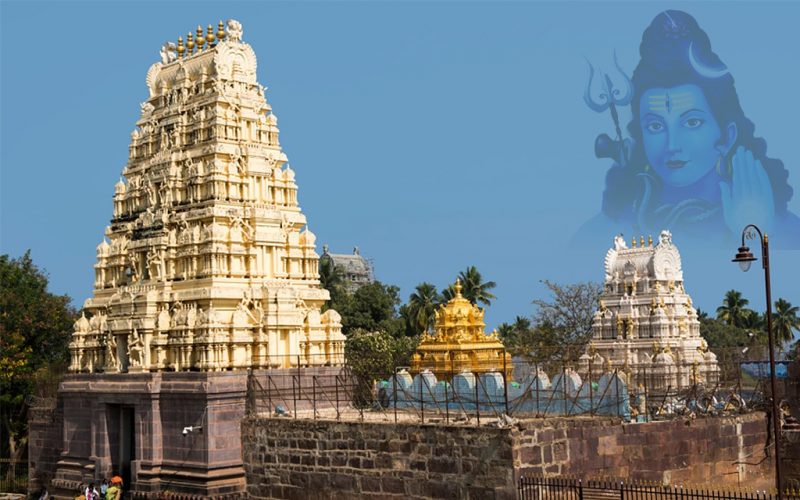 The temple of Mahakaleshwar is situated in Ujjain district of Madhya Pradesh. It is considered as one of the most important pilgrimage center for devotes of Lord Shiva. Episodes of Shiv Puran say that once there was a sage who are ardent devotee of Mahadev and lived a humble life. He had 4 sons who were just as humble as him. At that time, there lived a demon who was creating havoc in the region. The demon saw four sons of the sage worshipping Shiva Lingam and ordered his army to kill them all. Little did the demon know that Lord Shiva would appear to their rescue and annihilate him and his army of demons.

Moved by the staunch devotion, Mahadev asked the sons for a wish, to which they asked the Lord to reside there permanently and protect the people of the land. Since then, Lord Shiva is said to guard the region. Worshippers from every nook and cranny of the country come to pay their respect to the God and seek his blessings for good life. Mahakaleshwar temple is regarded as one of the 7 holy places that can liberate a human and grant him ‘Moksha’. 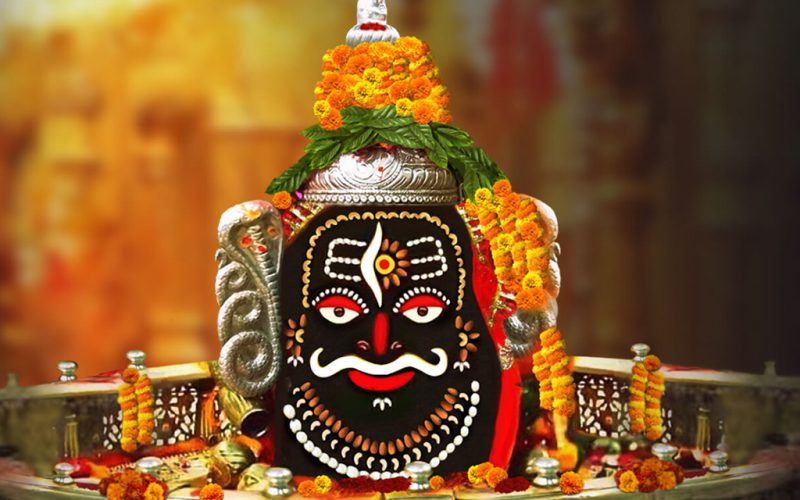 There are two temples of Lord Shiva in Omkareshwar. One goes by the name ‘Omkareshwar’ and other is known as ‘Amreshwar’. The Jyotirlingam on an island named ‘Shivapuri’ by the Narmada River. Legend has it that once Narad Muni was passing by Vindhya Mountain, who prided himself for being the tallest Mountain on the earth. On hearing this, Naradmuni told him that ‘Sumeru Mountain’ is the mightiest and the tallest Mountain on the earth as its peak reaches the abode of Lord Indra and other deities. Feeling disheartened, Vindhya prayed to Lord Shiva for a long time. Impressed by this, the Lord asked him for a boon, to which Mahadev blessed him with the power of being able to do anything it wishes. He then assumed the form of Lingam and stayed there forever. The island is shaped like the Hindu symbol of ‘Om’. 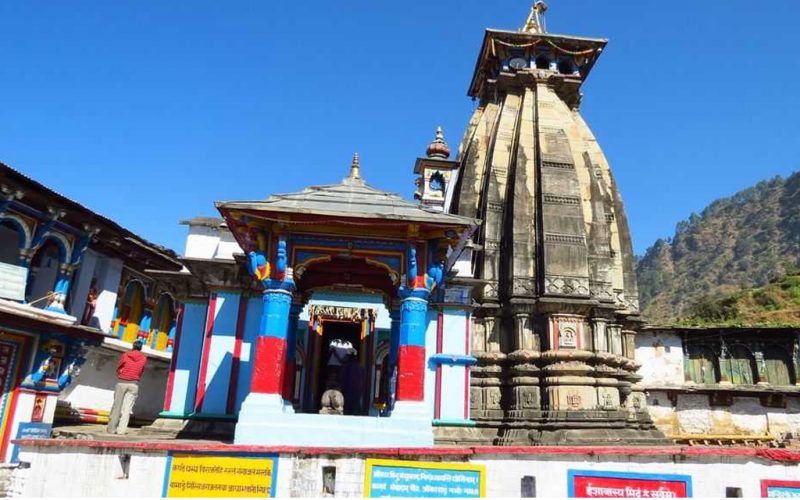 Known as one of the disputed Jyotirlinga temple in India, Vaidyanath Jyotirlingam is claimed by three destinations i.e Deogarh in Jharkhand, Baijnath in Himachal Pradesh and Parli Vaijnath in Maharashtra. The natives of these places claim that the Jyotirlingam lies in their region. Legend has it that during a severe penance, Ravana, the demon king of Srilanka asked Shiva to reside at his place. He offered his head to Lord Shiva. When he was about to cut off his tenth head, the lord appears offers him a jyotirling to take to Lanka and instructed that wherever the Jyotirlingam touches the ground, it will get installed there permanently. But Ganesha tricks Ravana while he was on his way and Ravana unintentionally placed the Jyotirlingam on the ground.  Since then pious Jyotirlinga has been claimed by these three destinations. 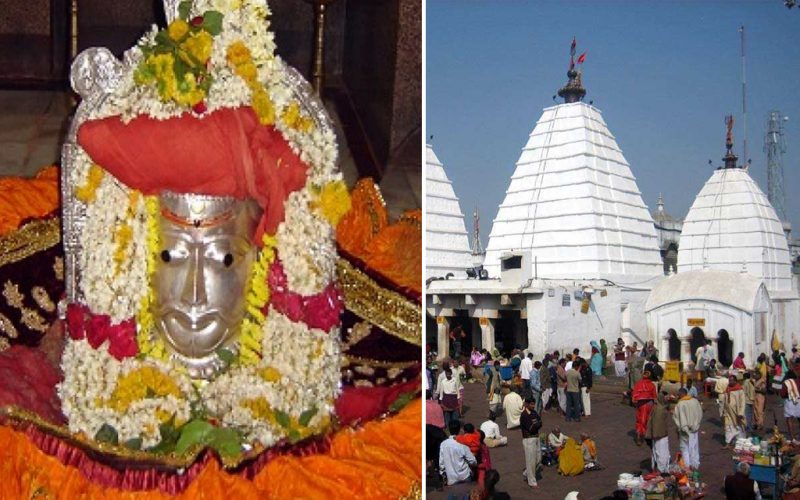 In the island of Rameshwaram, Tamil Nadu lie a Jyotirlinga that is closely associated with Lord Ram’s return from Sri Lanka. Legend has it that when Ram was on his way to Sri Lanka, he decided to stop by Rameshwaram and was drinking water on the seashore. Just then, he heard a celestial edict asking him to take permission for drinking water. Ram then made a Shiv Lingam of sand and worshipped it. When Lord Shiva appeared, Ram asked his blessings to defeat Ravana. After giving the blessings, Shiva assumed the form of Jyotirlinga. The lingam worshipped by Lord Ram is known as Ramanathar. 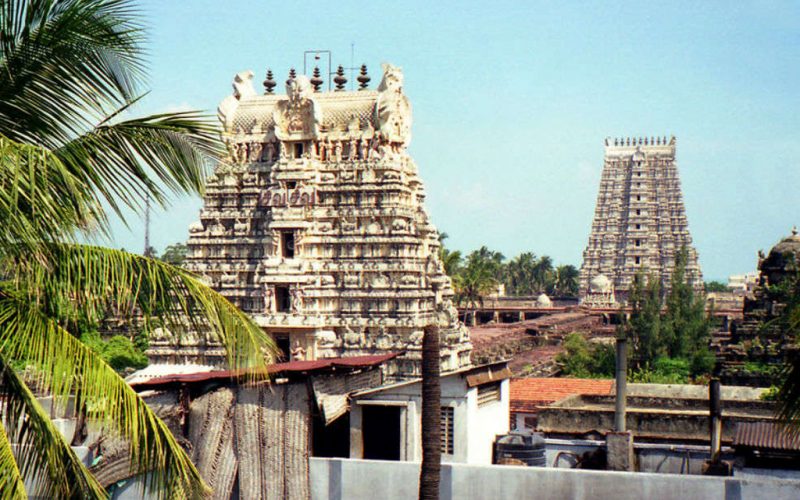 The temple of Kedarnath is situated at an altitude of 3583 m in the Himalays in Uttrakhand. It is one of the most revered pilgrimage spots in the country and also counted among the Chardham Yatra destinations. Open only for 6 months due to extreme climatic conditions, the temple is abode of Lord Shiva and has several stories associated with it. Kedar Mountain is the place where the Pandavas took penance. Adi Shankaracharya is also said to have taken Samadhi here. Traditions have it that pilgrims should first visit Yamunotri and Gangotri and bring holy waters of subsequent rivers. Then offer the same to Kedareshwar. 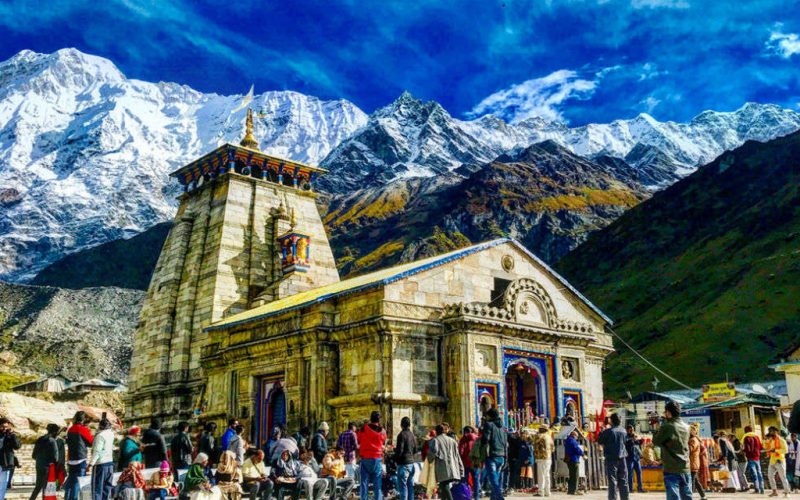 Situated about 100 Km from Pune, Bhimashankar temple lies on the banks of river Bhima and is one of the important pilgrimage sites in the country. Legend has it that once Lord Shiva was pleased by the devotion of a king named Bhimak and on his wish he took the form of Jyotirlinga only to stay there forever. It is believed that whoever visits the temple with pure heart gets his/her wish fulfilled by the Lord himself. 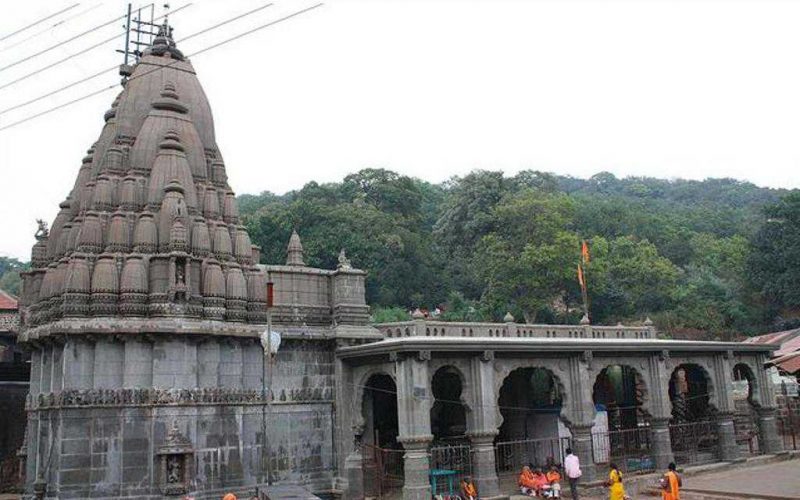 Vishwanath temple is the holiest temple located on the banks of River Ganga. Shiv Puran mentions the origin of this Jyotirlingam when the pillar of light, a manifestation of Lord Shiva broke through earth’s crust and flared towards heaven. It is believed that whoever comes here or die here attain liberation (Moksh) because Mahadev gives Tantra Mantra knowledge to the ones who are near their end. If someone prays Vishweshwar with full devotion, the Lord fulfils his desires. The place is also known as Kashi Vishwanath as it situated in Kashi (present day Varanasi). On auspicious days like Mahashivratri, the temple receives thousands of visitors per day. 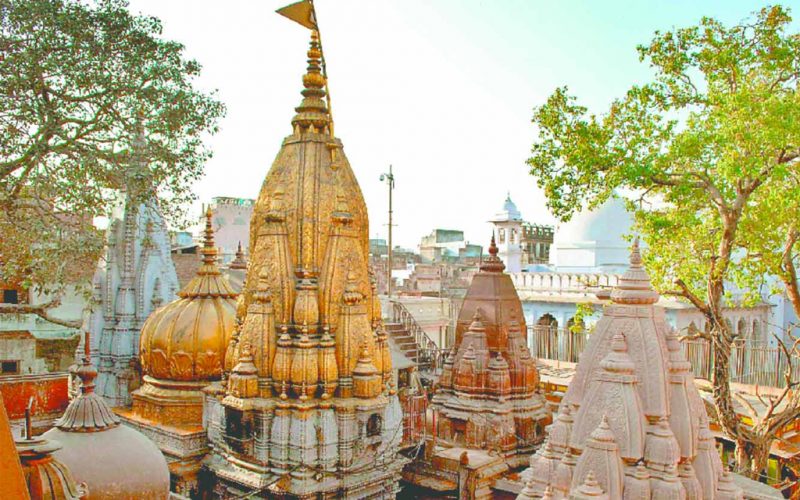 Located in Gujarat, Nageshwar temple also finds its mention in Shiv Puran. According to which, once there lived a demon named ‘Daruk’ who resided in a forest with his wife. Both of them unleashed horror on people living in the region. The demon trapped some villagers including a staunch devotee of Lord Shiva named ‘Supriya’. Supriya worshipped lord Shiva every day and taught other inmates to do the same as he believed that Shiva will rescue them. Shiva was moved by his devotee and came to his rescue in serpent form. After defeating the demons, Shiva took the form of Jyotirlinga here. Since then the place is called Nageshwar. It is said that whoever visits the temple and pray to the god, he/she become poison-free. 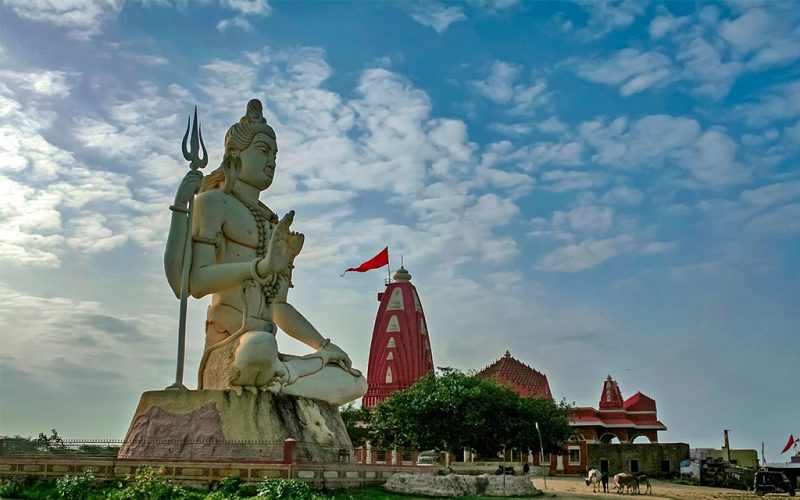 Trimbakeshwar temple in Nasik lies near the mountain ‘Brahmagiri’ from which the river Godavari flows. Godavari here is also known as Gautami Ganga and is considered the most sacred river in South India. Legend has it that on request of Gautam Rishi, Lord Mahadev asked Godavari to flow through the region. After worshipping Lord Shiva for a long time, Gautam Rishi requested the Lord to make the region his abode along with 1 crore heavenly gods. Lord Mahadev was quite impressed with the Rishi and granted him the boon and took the form of Jyotirlinga so that other human beings can also seek his blessings. Once in twelve years, all the heavenly Gods promised to come down to Nasik, when Jupiter falls in the zodiac sign of Leo. The day is celebrated in form of a grand fair where devotees from every nook and corner of the country come to take a bath in holy Godavari River and seek the blessings of Trimbakeshwar. 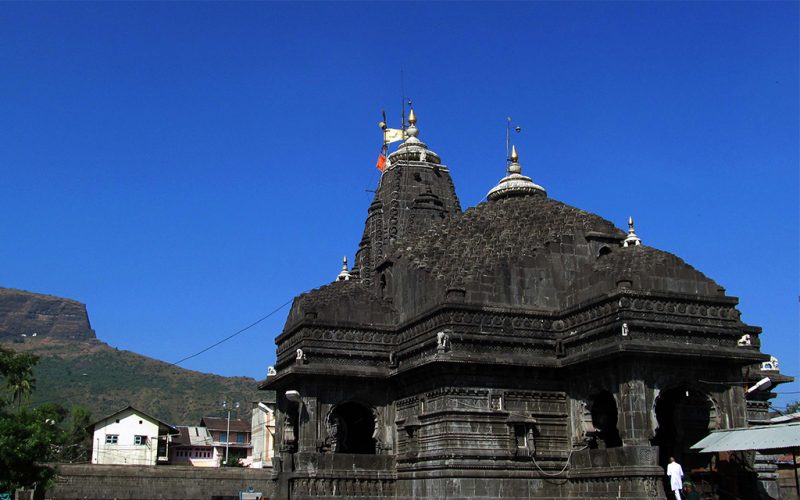 Ghrishneshwar Jyotirlinga is popular because of its location, as it is near Ajanta and Ellora caves. Shiv Puran says that there once lived a firm believer of Shiva , named kusuma who used to immerse Shiva’s lingam in a tank daily as part of her prayer. But, owing to the growing popularity of Kusuma, her husband’s second wife got jealous and killed Kusuma’s son. After hearing about her son’s death, Kusuma was depressed and heartbroken. Despite that she continued worshipping Shiva hoping that he would bring back her son. When Shiva saw her sufferings, he appeared before Kusuma and the villages at that time. Kusuma requested Shiva to manifest himself at that very site, in the form of Ghrishneshwar Jyotirlinga. This is how Ghrisneshwar Jyotirlinga originated. 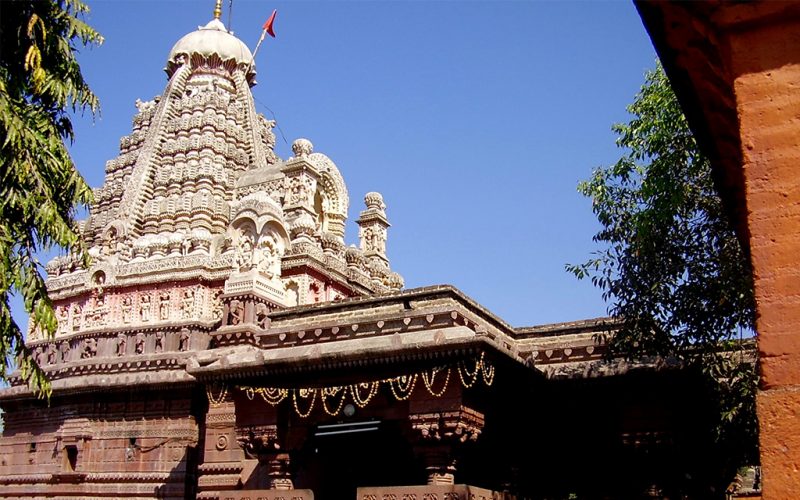