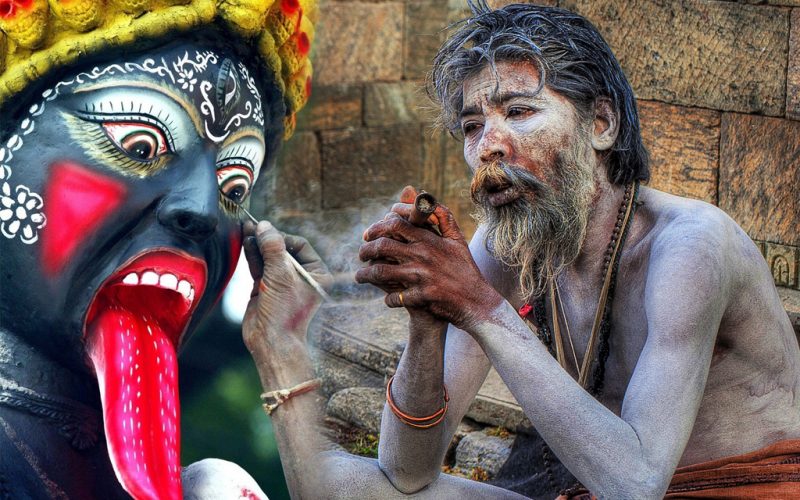 India is undoubtedly incredible. Our slogan ‘Incredible India’ itself presents a vague picture of our nation. Being the land of festivities and traditions where celebrations go synonymous with colors and pomp, India often leaves the world in wonderment. Even in the 21st century, people here blindly follow customs, traditions and rituals that have been adopted centuries ago. While some of these festivals and rituals are enjoyable, there are some that sound and look strange and even harmful. Since India is throbbing with diversity, traditions, culture, and rituals that are unique to it, it’s impossible to keep track of all of them. So today, we bring you 10 strange rituals in India that will either make you laugh or scare the hell of you. Here are 10 hilarious Indian customs and rituals people follow for different purposes.

Dhinga Gavar is a part of Rajasthan’s famous Gangaur festival despite the fact that it is celebrated only in Jodhpur. The festival is associated with a legend as per which one day Goddess Parvati got dressed up as a tribal woman and playfully teased Lord Shiva. To honor the deities, women dress up in weird costumes ranging from pirates to politicians, pilots to doctors, gods to saints, basically whichever character they fancy.

The festival usually commences after sunset where statues of Dhinga Gavar are kept in 11 different locations, each statue decorated with up to 30 kgs of gold. Women wield lathis (sticks) and beat those who try to take the statues away. It is said that any man who comes near these patrolling women after getting hit by them will be bestowed with prosperity and happiness. If he is unmarried, marriage is soon going to be on the cards for him and if he is already married then it brings good luck in his marital life.

Originated in Tamil Nadu, Theemithi or Thimithi is a festival that is celebrated to honor Draupadi (wife of the Pandavas) who walked through a bed of fire and emerged unhurt on the other side to prove her purity despite having 5 husbands. Ever since the episode, people in Tamil Nadu honor Draupadi by walking on a bed of fire. The ritual now has also spread to Singapore, Sri Lanka and other counties as well.

Theemithi is part of a larger ceremony stretching over a two-and-a-half-month period where that episode of Mahabharata is re-enacted.  It is believed that whoever walks barefoot across a pit filled with burning firewood or charcoal is granted a wish or blessing by the goddess. The walkers aren’t allowed to run on the bed of fire but walk slowly taking steps one by one. The festival might sound horrible but actually witnessing it is something only brave hearts can do.  Are you brave enough to witness the burnt feet of people as they walk slowly through the flaming pit of charcoal?

A traditional sport in Tamil Nadu, Jallikattu holds enormous cultural significance for farmers in India. It is a bull-taming festival that involves aggressive encounter between bulls and humans where humans try to grab the animals by their hump and stop them from escaping. Jallikattu bulls are raised specially and they are taken care of quite differently from the normal cattle so that they become fir for fighting. Unlike Spanish bullfighting, bulls in Jallikattu aren’t subjected to killing.

Jallikattu is believed to celebrate the spirit of hardworking farmers who work day and night and plow the field with the help of these bulls. This sport has been time and again criticized by animal right activities and organizations like PETA. In 2014, Jallikattu was banned by the supreme court of India. Despite that, the practice is still carried out in certain rural areas away from the vigilance of the government. The controversy around Jallikattu brings an important question to the surface, is Jallikattu really celebrated to honor farmers or merely for entertainment? Guess we won’t be able to find the answer.

Monsoon is the lifeline of Indian farmers. Since much of the agriculture depends on rain, people will go to any extent to appease Lord Indra (the rain god). The culture of the animal wedding is highly prevalent in Maharashtra, Assam, Karnataka and some other states where different animals are wedded in a hope to get good monsoon. Rains are indeed a big deal in India, no wonder why people do weird things like animal wedding for instance. In certain parts of Maharashtra and Assam, frogs are wedded, while donkeys are married off in Karnataka.  Just like normal Indian weddings, animal weddings are also celebrated with equal fervor and enthusiasm where priests conduct the ritual and feasts are observed.

Talk about weird rituals in India that will make you fall flat on the surface, and we have Agni Keli, a festival where burning palm fronds are thrown by the devotees at each other to please Goddess Durga. The ritual takes place in the Kateel Durga Parameswari Temple in Mangalore and is attended by the staunch devotees and followers of Goddess Durga. Those who participate in this ritual are split into two groups who start throwing burning frond torches at each other trying to hit as many as devotees possible. In this fight, each participant can only throw five times. If they suffer burns, the holy water of Kumkumarchane is poured or sprayed to heal the burns.

Marking the anniversary of the battle of Karbala in which Prophet Mohammad’s grandson, Hussein Ibn Ali was killed mercilessly along with his warriors, Shia Muslims all over the world participate in mass mourning to pay tribute to them. Mourners on this day, whip themselves with lashes until they are drenched in blood. Some gather at mosques to cry, while others perform public rituals that include chest-beating, self-flagellation with chains and forehead-cutting.

Indians think too much about marriage. Girls from birth are conditioned and confined to a certain role that they are expected to follow until their death. Just like that, puberty is a big deal in India. In southern parts of India, girls on reaching sexual maturity undergo puberty ceremony that celebrates their readiness for marriage. On this day, girls are dressed up like a bride and are showered with gifts by their family, relatives and friends. There are other rituals that are also considered a part of puberty ceremony including one where girls are kept in isolation and are not allowed to meet any man till the entire process is done with.

Would you believe that there is a ritual where people actually roll over the food, food that is one of the most precious resources in the world? In Karnataka’s Kukke Subraman Temple, people from the so-called lower cast roll on the leftover food eaten by the Brahmins. Strange right? But it’s true. The ritual, also called ‘Made Snana’ is believed to cure those of all the ailments who perform the ritual. It’s ironic that despite shunning castism, such customs still prevail in our country.