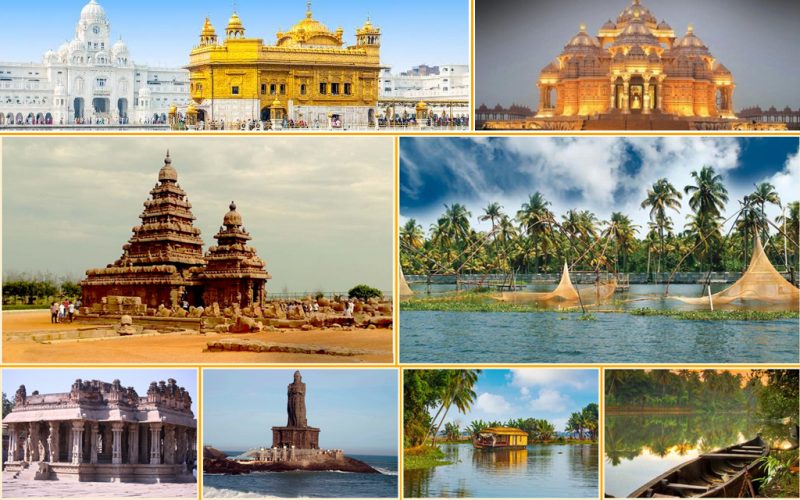 India is a land of diversity where people regardless of their religion and faith coexist peacefully. Religion is an important element i.e. permeated in the lives of Indians. The very air of the country carries the fragrance of piousness, devotion, Karma, Dharma and forgiveness. This is the reason why throughout the year, you can find devotees and pilgrims flooding the holy places in India. No matter if you are a non-believer or a believer belongs to a different religion, these holy places in India will make you establish a connection with mighty omnipresence god. For an exciting and enlightening journey of a lifetime, add these religious places to your travel bucket list for 2020. You’ll not regret it!

The holy cave temple of Goddess Vaishno Devi is the most revered in India where devotees from different states come to seek blessing for a good life, prosperity and happiness. Legend has it that due to a prolonged chase by Bhairav Nath (disciple of Guru Gorak Nath), the goddess took shelter in the caves and meditated there. But the tenacious Bhairav Nath didn’t stop and continued chasing her with all his might. The aftermath of which resulted in his annihilation where the goddess ends up beheading the disciple.

Soon after realizing the power of the goddess and futility of his mission, Bhairav Nath prayed for forgiveness and the goddess blessed him with the boon that every devotee of the goddess would have to have the Darshans of Bhairon after having the Darshans of the Goddess and only then the yatra of a devotee be complete. Thus Mata Vaishnavi, in the form tall rock with three heads is the ultimate destination of a devotee. The temple where the Pindis of the goddess is present has to be trekked for about 7.4 KM. It is said that you cannot visit the temple unless the goddess calls you to visit her sacred abode.

Lord Shiva is extremely popular amongst all the Hindu deities. To get closer to him, millions of ardent devotees trek through the challenging mountains to Shri Amarnath ji Shrine in Kashmir (where the god appears in form of an Ice Lingam) every year in pay respect and seek his blessings. As per the legend, the Amarnath caves are the place where Lord Shiva narrated the secret of immortality to his wife, Goddess Parvati.

It is said that as a matter of chance, a pair of white pigeons overhead the story and became immortal. Some pilgrims in the past have reported the incident where they have spotted the pigeons and were amazed as to how they survived the harshest weather and high altitude area. To this day, devotees believe that anyone who has had the luck to see the pair would be blessed for life by Lord Shiva. The enigma behind the formation of Shiva Lingam in the caves of Amarnath still hasn’t been solved yet.

Also known as Shri Harmandir Sahib, Golden Temple is a reflection of egalitarianism and humbleness. The temple is finished in exquisite gold and marble work with a gilded dome surrounded by a holy tank (Amrit Sarovar) and four entrances welcoming people of all faiths and nationality. The idea of construction of the temple was given by the fifth Nanak, Guru Arjan Sahib who also designed the architecture of the golden temple. Millions of people come to pay their respect to the holy Granth. The place is full of tranquility that cannot be felt anywhere else. Golden temple is also the largest langars (free kitchen) in the world serving hot meals to millions of people regularly.

Ajmer Sharif is the holy shrine of sufi saint Khwaja Moinuddin Chishti who was known to be blessed by Allah and possessed miraculous powers. The saint was popular for solving problems of the common man and fulfilling their wishes. This famous shrine holds importance for Islam followers. Interestingly, not only Muslims, but people of all faith and religion come to Ajmer Sharif to pay obeisance to the saint round the year. It is believed that whoever visits Ajmer Sharif and prays with his/her pure faith and loyalty at the Dargah will get liberated from earthly possessions and go straight to Jannat (heaven) after death. The Dargah houses several tombs, buildings and courtyards portraying the finest of Mughal architecture.

Haridwar ‘gateway to gods’ is a point of entry to dev bhoomi and char dham, the holiest pilgrimage sites for Hindu devotees of Lord Vishnu and Lord Shiva. Every year millions of tourists flock to pay their respect to the lord and cleanse themselves of sins by bathing in River Ganga. Legend has it that Kind Bhagirath brought the river from heaven to earth to provide salvation to his ancestors. Ever since then, the land was sanctified by the presence of three gods- Brahma, Vishnu and Mahesh. It is also a place where Kumbh Mela occurs every 12 years. According to the devotees, one dip in the holy water of Ganga can cure you of any illness and help attain salvation. Many people flow the ashes of their deceased ones to let them rest in peace.

Do you want to experience spirituality? Head to Shirdi and you’d know why it is swarmed with devotees throughout the year. It is home of great saint Baba Sai who is regarded as one of the greatest saints India has ever seen. Sai Baba is endowed with unprecedented powers and is worshipped by millions of devotees as a God incarnate. A visit to Shirdi is believed to heal the sick, save lives, protect vulnerable, granting offspring, facilitating financial gains and bring transformation to the lives of those who have lost hope and came to visit the holy saint as last resort.

Tirumala Tirupati is the most pious place where Lord Venkateshwara who was the incarnation of Lord Vishnu is known to reside. The temple attracts more than 50,000 pilgrims a day who come to seek the blessing of the lord. Dedicated to the lord, this temple is set at the highest peak of Seshachalam hills in Tirupati and is built in the Dravidian style of architecture dating from 300 AD. Tirupati is world-famous for Tirupati Ladoos that are distributed among the devotees who come to visit the lord. The prasadam is first offered to the lord Venkateshwara and then given to the devotees thereafter. It is believed that even eating the prasadam of Tirupati is enough to get blessings from the lord. Which is why, people from all over the world come to see the magnificence of Tirumala Tirupati.

Time is running out! Visit these tourist places in Malaysia before it’s too late: Summer Holidays in Malaysia