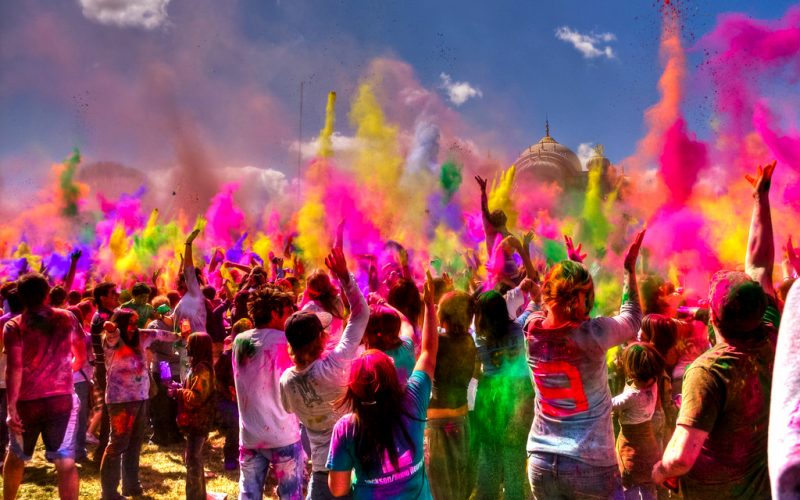 Dubbed as the most colorful festival in the world, Holi is undoubtedly the best time of the year that marks the arrival of spring and ending of winter. March brings the fragrance of flowers and aura of warmth and happiness in the air. The festival of color makes people forget resentment and bad feelings towards each other and celebrate the spirit of love and happiness through colors, music, dance and appetizing snacks. If you are also looking forward to a happening arrival of spring, prepare yourself for Holi 2020 and get ready to throw eco-friendly colored powder and enjoy foot-tapping bollywood music with your friends and family. And who can forget gulping Bhang on Holi? Here’s an insight into this revered festival of love, color and happiness.

Why We Celebrate Holi?

The Story of Prahlad: Holi is celebrated on the full moon day falling in the month of Phalguna (March). The history of Holi is associated with the legend of a king named ‘Hiranyakashipu’. According to the Hindu mythology, Prahlad (son of kind Hiranyakashipu) was an ardent devotee of Lord Vishnu. The king didn’t like the idea of his son worshipping Vishnu instead of showing devotion to him. Therefore, he tried to get him killed several times but Lord Vishnu miraculously saved him every time. This made the king furious and he called his sister ‘Holika’ for help.

Now, Holika had a special cloak that prevented her from being harmed by fire. When she sat on a bonfire with Prahlad, the garment flew from Holika and covered Prahlad thus burning Holika to death instead. From then onwards, a day before Holi, Choti Holi is celebrated where ‘Holika Dahan’ ritual is carried out where people light up a bonfire symbolizing the victory of good over evil.

The Story of Radha and Krishna: Another story associated with the Holi celebration is that of Radha and Krishna. As per Hindu mythology, when Krishna was baby, he drank poisonous milk from a demon that turned his skin into blue color. When Krishna fell in love with Radha and worried that she wouldn’t reciprocate his love owing to his skin, he mischievously applied color on Radha’s fair face. Soon after that, they became a couple. Since then applying colors on your loved one’s face became a tradition.

How Is Holi Celebrated In India?

Holi in India is much more than throwing colors and taking endless pictures. It’s the time of the year exclusively dedicated to fun and gets you out of the monotony of March.  Holi is a festival that brings you and your family or friends together which you might not normally have fun with. Partaking in the Holi festival is something no one wants to miss in India. Holi is celebrated to enjoy uninterrupted fun with loved ones by gently applying colors on each other’s face, shooting water from water guns, dancing to the trending Holi music and savoring delicacies such as Gujiya, Kanji, Pakodas, Dahi-Bhalla and more. Here’s how Holi is celebrated in India:

Holika Dahan: A ritual where people light up a bonfire on the eve of Holi and dance around the bonfire to the beat of drums thus making the atmosphere electric and lively. During the ritual, people ask for forgiveness from the god and pray for blessings.

Holi: Holi in India goes synonymous with Gulal, Pichkari and Gujiyas. On this day, people literally jump into the battle of colors and drown their loved ones in a puddle of gulal. Sweets and tangy drinks are offered to the guests who come to meet you. Temples are decorated with flowers, rangolis and lights. Some people host Holi party whereas others simply join Holi extravaganza nearby and dance with each other to the Holi music played by the Djs. Basically, Holi in India is celebrated with fun and frolic to the extent of buffoonery where everyone seems to go mad and get intoxicated by Bhaang (because it’s legit and no one will judge!).

Here are some fascinating Holi traditions/facts in India that will literally make your jaw drop:

Lath Mar Holi: If you think Holi means applying colors and throwing colorful water on each other’s face, you couldn’t be more wrong. Ask anyone from Barsana and they’ll tell you the twisted yet funky side of Holi celebration. In Barsana, womenfolk from the villages beat the men with long sticks (Dandas). The men often tease women to get their attention and hence get the best response from the ladies so much so that they have to shield themselves from the ladies who don’t want to lose the opportunity. Talk about the fun side of Holi, attending Lath Mar Holi festival in Barsana is definitely an experience worth having in life.

‘Bura Na Mano Holi Hai’: The popular saying ‘bura na mano, holi hai’ which means ‘please don’t mind, it’s Holi’ is a catchphrase used by people to play pranks on their loved one, tease their loved ones and enjoy the fun and frolic atmosphere.

Bhang, drink at your own risk: Consuming ‘Bhang’ on Holi has become a tradition. Bhang is an intoxicating drink culled from the leaves and buds of Cannabis that escalate the festive aura of Holi. Associated with Lord Shiva, Bhang is considered sacred by Hindus. Consuming Bhang on Holi symbolizes their devotion to the lord. Aside from the religious aspect, Bhang is also consumed by people (in form of Thandai, Bhang mixed in a refreshing drink) owing to its medicinal properties. But beware! Too much of anything is bad, so consume Bhang at your own peril.

Tags: happy holi, holi 2020, Holi festival, holi in india, when is holi celebration, why do we celebrate Holi

Make 2020 the Year Of Gratitude

A Timeline Of The Pandemics That Changed The Course Of The World: History’s 5 Worst Pandemics