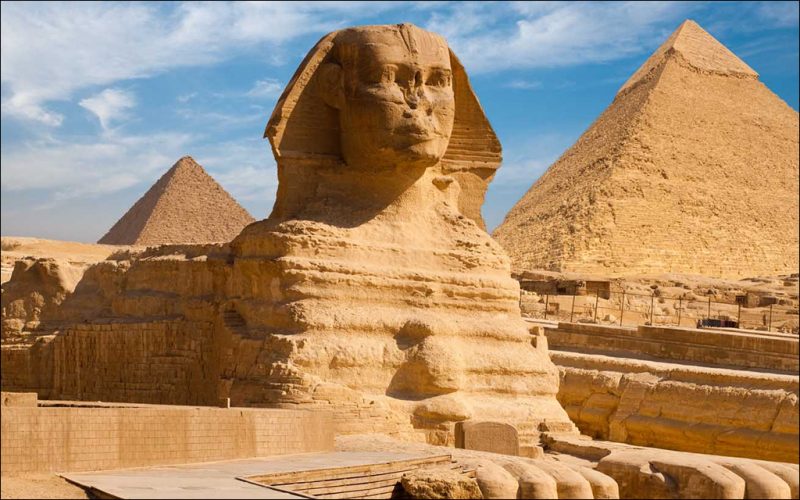 Egypt is an unforgettable travel destination that leaves an everlasting impression in heart who visit this mysterious land. If you’re a big-time fan of ‘The Mummy’, then you need no excuse for travelling Egypt. Even if you aren’t one, Egypt will change your perspective and will make you fall in love with it! Despite the rough patch it went through in recent times, the tourism industry hasn’t seen flak as from across the world come to visit the ‘land of the ’. From the formidable Nile to gigantic monuments, enchanting desert to the spellbinding oasis, lush delta to diverse wildlife, Egypt is a land wrapped in a mystery that is more than just a ‘romantic getaway’ for couples.

Like every place in the world, Egypt also has got two faces- the one with bustling bazaars and monuments reminding of ancient era and other with an element of modernity in it. Over the centuries, Egypt has drawn tourists to explore the iconic ancient treasures built by the great pharaohs. Pyramids of Giza, Temple of Abu Simbel, Lotus-columned temples of Luxor and Karnak valley are a constant reminder of the glorious era of Egyptian kings when architecture reached its pinnacle. To understand the true colours of this glorious land, here are some destinations you must cover when travelling Egypt.

Located on the banks of river Nile is the ancient city of Cairo (more than 1000 years old) which is a world in itself with history engrossed in its every nook and corner. With lush vegetation, irrigated shorelines, adjoining tall skyscraper, this city is a point where the old era meets modern one. Amidst these extremes, lies other monument built during Roman, Arab and Turkish times.

The noise of cars honking, sprawling food joints, functioning bazaar, people jumping in and out of a moving bus, dusty lanes, roads occupied by donkey carriages, buses and practically everything can shock you a little. But don’t let this affect your vacation in Egypt. Be prepared to lose yourself in the bedazzling capital city. Cairo is a place where you’ll feel as if time has stopped or has landed you in the ancient era.

Situated on the east bank of river Nile, the ancient city of Luxor has a deep history of power, betrayal and war during 16th and 11th centuries BC. Cruising to this place is simply one-of-a-kind experience you can ever have. The temple of Luxor and Karnak temple have columns, obelisks, and hieroglyphics carved into it making the sight pleasant to the eyes. On the west bank, there are tombs of King Tut and Ramses III. The unparalleled view of Nile gushing between the modern city and west-bank necropolis can take anyone’s breath away.

There is simply so much to see in Luxor that you’d lost track of time yet still would want to leave the place. If you want to learn more about ‘mummification’, head to the Luxor museum and lose yourself in the interesting history of Egypt.  The museum also houses ancient artifacts recovered from many tombs. According to the locals, some of the artifacts are considered to be cursed as people who risked touching them died mysteriously. Now, who wouldn’t want to see such mysterious artifacts?

Founded by Alexander the great, Alexandria is the second-largest city of Egypt and a major port bustling with commercial trade centers. It has the great library that was considered to be the largest in the ancient world. The city fell into many hands throughout the history which is why you can see the influence of the Roman Empire, Ottoman Empire and Arabs in its monuments, culture, food, practically everything. Alexandria is a place to feel the history. Citadel of Qaitbay situated on the Mediterranean sea coast is a sight to behold.

What pulls travelers to this enchanting city is the legend associated the Alexander the great, the tragedy the city went through, phenomenal amalgamation of different cultures and different religions thriving peacefully. Only a few remains of Alexandria stood the test of time while the rest got submerged into the sea. Despite everything, Alexandria has a unique appeal to it calling out historians and history lovers to explore and understand the inception and downfall of one of the mightiest empire in the world.

Aswan is the southernmost city of Egypt that is an important market place and a gateway to Africa. Adored with the beautiful temple of Isis, lush green botanical garden and a gigantic museum displaying the Nubian culture, history and artifacts, Aswan is a place that deserves to a tour while exploring the best parts of Egypt. A journey from Luxor to Aswan is no less than a roller coaster ride. The temple of Abu Simbel (two temples carved into the mountainside) will walk you through the past when Egyptian architecture was in its best form. What is more interesting is the way this temple was built. On October 2 and February 22, when sun rays hit the inner sanctuary, it lightens up three statues seated on a bench. Historians believe that these dates might be related to coronation and birth of the Ramses II.

Travelling Egypt is more than seeing pyramids, cruising the river Nile and visiting other important historical places. A tour to Egypt encompasses plenty of fun activities too. The western desert of Egypt makes things more exciting as it is a part of the Sahara desert (dream of many travelers). Here you can set your spirit free and let it enjoy everything the colossal desert has to offer. Western desert spans an area from the Mediterranean Sea southwards to the border of Sudan. It also is home to a popular tourist site i.e. Siwa oasis (once visited by Herodotus and Alexander the great).

Apart from that, there are plenty of beautiful oases you can travel to capture the soul of this desert land. Being dry as a bone, the desert surprisingly is not lacking in water. Occasional showers fill the underground aquifers and eventually come out to the surface presenting a magnificent sight.  From desert safari to oasis hopping, swimming in the cool water of oasis to indulging in scrumptious and drool-worthy delicacies, or riding a camel, the western desert is a complete fun package in itself that will keep on surprising you.

If you want to make your Egypt vacation a memorable one, then do not forget to add these places to your travel list. You’ll be shocked to see the sheer blend of modernity and rustic charm of ancient cities. The land of pharaohs will force you to visit it over again. Before going ahead with this journey, make sure to choose a suitable Egypt travel package which gives you great deals and discounts on hotel bookings (which is to save your time and money!). Feel free to share your thoughts on vacation in Egypt through the comment section. Have a happy time exploring Egypt!

Travel Alerts! Incredible Fairs in India You Need to Add to Your Bucket List Right Now!