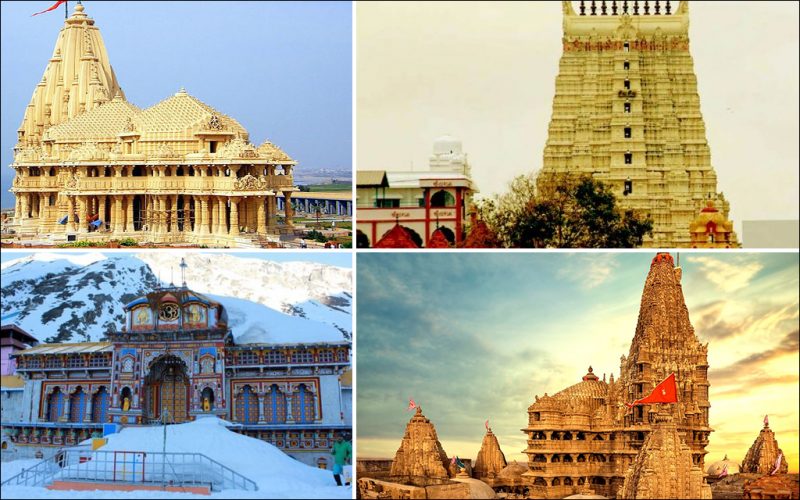 India is a country where many cultures and traditions thrive peacefully. Hindu religion dominating the nation is also full of customs and age-old beliefs that are passed onto generations after generations. One such strong belief is of Char Dham pilgrimage Yatra which is an important part of Hinduism.If you are not familiar with Char Dham ki Yatra, worry not as this post will take you on a journey where you’ll know everything there is to know about travelling char dham. Established by Adi Guru Shankaracharya in 8th century AD, these four sacred abodes are keys to salvation, forgiveness and enlightenment.

What is Char Dham Yatra?

Badrinath:Located in Chamoli district of Uttarakhand, Badrinath temple is the site where Nar-Narayan, an avatar of Lord Vishnu did severe Tapasya. The place got its name owing to the berry trees found in abundance here. There are many interesting myths and legends associated with Badrinath. One of the most popular beliefs is that it was once an abode of Lord Shiva but Lord Vishnu got mesmerized with the location and landscape surrounding the site and somehow managed to convince Lord Shiva to move to Kedarnath. The place is swarmed with tourists and pilgrims throughout the year with different purposes.

Dwarka:Dwarkadhish temple in Gujarat is dedicated to Lord Krishna who is worshipped here as the ruler of Dwarka. The temple is believed to be more than 2000 years old and became an important pilgrimage site in India when Guru Shankaracharya visited it. Merely 2 kms away from Dwarka is the temple of Rukmini Devi, wife of Lord Krishna. Legend has it that once sage Durvasa came to meet the pair and requested them to drop him to his place. The pair agreed and followed him, meanwhile, Rukmini got exhausted and asked Krishna for water, to which the Lord dug a hole in the land bringing out ganga. This made the sage furious and he cursed rukmini to stay in the place. Situated on the creek of Gomti river is Dwarkadhish temple- a reminder of omnipresence Lord. Made of limestone, the temple is afive-story structure built on 72 pillars. There are two doors/entrances to the temple, moksha dwar and swarga dwar. Swarg dwar has 56 steps leading to Gomti river.

Puri:Being one of the oldest civilizations in the eastern part of India, Puri is the place where Lord Jagannath (an avatar of Lord Vishnu) is worshipped with full devotion. The temple is said to be more than 1000 years old and has intricate carvings done in the interior and exterior parts of it. Lord Jagannath is said to be the avatar of Vishnu in Kali Yug. Interestingly, Puri is the only place in the country where Subhadara, sister of the Lord is also worshipped. Devotees of Lord Jagannath believe that whoever pays a visit to the lord with pure heart and consciousness, his/her sins are washed away.

Rameswaram:Rameswaram’s history goes back to the era when Lord Ram (avatar of Lord Vishnu) built a setu (bridge) to rescue his wife Sita from clutches of Ravana, the demon king of sri lanka. Ramanatha swamy temple is the place where lord Ram made Shiva Lingam to worship Lord Shiva before ascending on an arduous journey to Sri Lanka. The temple has one of the twelve jyotirlingas which are revered to be the manifestations of Lord Shiva and known to be originating from his different body parts.

Char Dham holds a prominent place in the heart of Hindus according to whom a visit to these 4 dhams can lead to Moksha (Salvation) from the life full of suffering.  These four religious shrines are dedicated to Lord Vishnu, Lord Krishna, Lord Jagannath and Lord Shiva (It was Lord Ram who built Shiva Lingam to worship Lord Shiva). The purpose behind travelling Char Dham is manifold. Some think of these pious places as merely a tourist destination, some go on a char dham Yatra to seek salvation, some are looking for peace of mind, some wishes to seek lord’s blessings when they are going through good/bad times, some visit the deities to seek forgiveness for their sins, the purpose of going on this arduous yet soul-fulfilling journey are numerous.

What is Chota Char Dham?

The small circuit comprising of Yamunotri, Gangotri, Kedarnath and Badrinath ( four abodes of Hindu deities) are popular as chota char dham. Chota char dham journey is as important as char dham one. People visit these places to attain peace and happiness. Yamunotri is the place of origin of river Yamuna which is considered one of the pious rivers in hindu mythology. Similarly, Gangotri is where river Ganga originated from. Kedarnath is known to be the abode of Lord Shiva who is worshipped in form of Shiva Lingam. The heart-shattering flash flood of 2013 washed away entire Chota char dham rendering people homeless and jobless.  But even this massive natural tragedy didn’t shake or dwindled the faith of devotees who still come here to pray for their wellbeing.

All You Need To Know About Leh & Ladakh Trip!

This Oman Travel Guide is everything you’ve been looking For: Bucket List Ideas for 2020