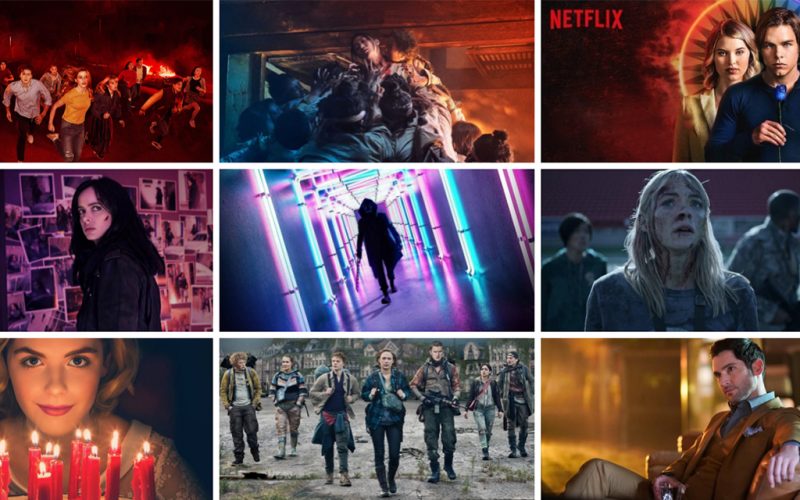 Who doesn’t love watching movies or TV series on Netflix? The media service provider has emerged as the most loved streaming services across the globe. With its different and fresh content, it has brought massive changes in the entertainment industry. If you are also someone who just want to relax and chill on weekends, the best way to do that is binge-watching great programs and series on Netflix. With 1000+ programs, Netflix makes it difficult for viewers to choose which series to watch. In fact, finding the best Netflix series is like picking a needle from out of haystacks. But if you are looking for binge-watch worthy series on Netflix, we can help you with that. This list of best Netflix series covers every genre from horror to comedy, thriller to drama and whatnot. It’s time to grab popcorn and enjoy the best TV shows on Netflix.

Based on Sir Arthur Conan Doyle’s detective stories of Sherlock Holmes, Sherlock on Netflix is a fabulous story based on a modern detective and his doctor partner (a veteran of the Afgan war) solving crimes, puzzles and murder mysteries in 21st century London using an unconventional method of deduction. The story has all the essential ingredients that keep the audience glued to it. With sudden twist and turns, cliffhangers and vibrant characters (some of whom make you unnerving), Sherlock is a Netflix series that ought to be watched by everyone. You are bound to go on a roller-coaster ride of emotions involving laughter, sadness, restlessness, shock and whatever left.  To sum it up, Sherlock is a powerful dose of entertainment that is worth binge-watching on weekends or anytime you like.  You are likely to become a Sherlockian after watching the series.

Contrary to how scientific the title might sound, the Big Bang Theory is fun, science, madness, adventure all rolled into one. It’s a story of two awkward and geeky physicists who knows how the universe works but don’t know the basic elements of communication outside their laboratory. These socially-awkward nerds have no luck with women in general and their world is turned upside down when a girl moves in next door. What happens next is meant to be discovered by watching the series. Nonetheless, BBT is one of the best series to watch on Netflix even if you are not interested in science. The Big Bang Theory will not let you get bored (not even for a minute!). It’s a perfect comedy sitcom on Netflix to binge-watch with friends.

Introduced back in 1994, Friends is more than a sitcom. It’s a program that was way ahead of its time and one can clearly find its relevancy in the present world. Friends talk about the lives of 6 reckless adults (each having an interesting personality) living on the edge and indulging in adventures that make their lives happening and crazy. The eccentricity of characters is one thing that will make you fall in love with these characters. We have Monica who has OCD, Rachel who ditches her fiancé on her wedding day, Ross who has had 3 divorces, Joey a struggling actor, Chandler Bing with his mommy-daddy issues and phoebe who’s mom killed herself when she and her evil sister Ursula was 14. Their adventures are worth watching in this lifetime. Friends is a TV series that will make you want to be friends with these characters. Don’t feel weird if you find a character resembling your personality though!

Set in 1983 Indiana, Stranger thing is an enjoyable series that will keep you stick to it till the end. The story starts with the disappearance of a boy named ‘will byers’ who is pulled into a dark world by a creature. His family, friends and local authorities start searching for the answers and unravel series of mysteries involving secret experiments of government, terrifying supernatural forces and a weird girl with superpowers. The moment you press play on this series, you will be hooked in. Stranger things will make you cancel all plans for the immediate future.

Often dubbed as the counterpart of stranger things, ‘dark’ on Netflix is the story of four families solving the mystery of a missing child and unraveling mysteries on their way. The show depicts three different time periods of the town’s history where each period is somehow connected. The characters seem to have a connection with one another without knowing that they all have this connection and that they are all hiding something without knowing this. Resembling a little to stranger things (but not entirely), Dark is a series that is hard to watch but impossible to resist. The portrayal of time travel paradoxes is likely to bring out all sorts of emotions in you.

Talk about binge-watch worthy Netflix series, Breaking Bad is way beyond that. It’s a series that makes you feel connected and sympathize with the protagonist. Walter White is a genius high school chemistry teacher who is diagnosed with lung cancer and decided to quit his job and become an outlaw, a meth producer hoping to secure his family’s future. This neo-western crime drama has everything from drugs, narcotics, cartels and not to forget rustic Mexican vibes. This TV show has a great drama that makes no excuses and delivers the best plots that keep viewers engaged till the end.

If you have a strong appetite for horror series, then American horror story will give you nightmares. It’s an anthology of stories consisting of everything from a house with a deadly secret, a witch coven, an unusual show, a demented asylum, possessed farmhouse, an apocalypse, a cult, you name it and this show has got it. The program has been around for 9 seasons, each of them having phenomenally-woven stories that can scare the hell out of you. If you have got a heart of steel, watching American horror story on Netflix is the first thing to do this weekend. You won’t have any regrets.

We all tend to get attracted by complex and damaged characters, twisted plot lines and elements that make us feel connected with those characters. If your love for crime dramas goes beyond anything, you have got to watch Dexter (a dark yet compelling horror-drama series). The transformation of a blood-spatter analyst by the day who turns serial killer at night and target murderers is depicted in the best possible way. The suspense, elegantly-crafter storyline is what makes Dexter different from other crime dramas and a binge-watch worthy TV series. Dexter mostly ends the episode on a happy note but still can send shivers down your spine.

One of the most promising series on Netflix, the Witcher is a fantasy series adapted from the books written by Polish author Andrzej Sapkowski. Introduced by Netflix in 2019, The Witcher revolves around a grizzled monster hunter Geralt of Rivia who ride across the country looking for work and getting caught in the complex web of destiny in a world where people are more dangerous and wicked than the beasts he hunts. The first season depicts Yennefer’s rise from a deformed and low-self esteemed girl to an embittered and powerful sorceress. The Witcher is a harrowing tale that deals with abuse, betrayal, power and anger while delivering enjoyable twists and turns with each episode.

Orange Is the New Black

Orange is the new black is a story of a woman in her thirties whose sorted life is turned upside down when she is suddenly sentenced to a 15-month prison stay for transporting drug money a decade earlier. The series describes how her stay in prison affected her life and the life of people associated with her. Throughout her sentence, she learns the do’s and don’ts. Her struggle in prison will make you laugh and cry at the same time. Overall the show gives you everything from funny conversations, light-humor, comedy, and a complete dose of entertainment. It is one of the best series on Netflix to enjoy with friends.

Perfect Travel Outfits for Men and Women! Only the Best Ones!