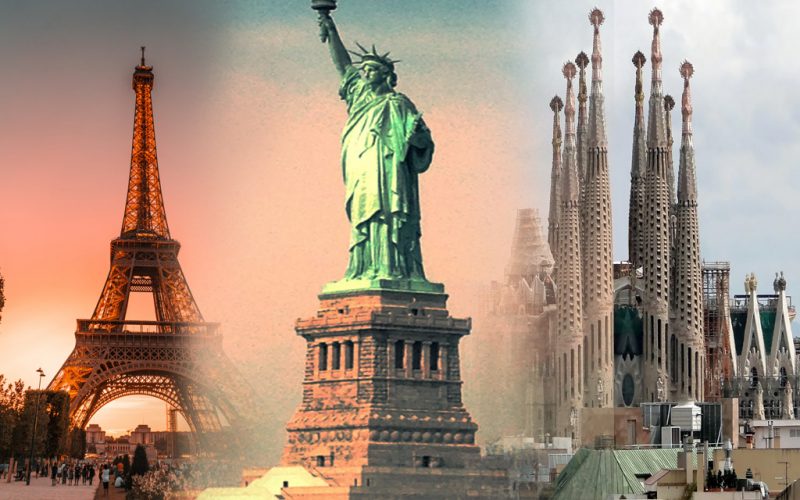 People who lived before us left a legacy behind. They also left some striking architectural wonders that continue to take our breath away. If you have ever given a thought on why these magnificent structures were built and how the work was carried out, then you are not alone. We bring out some of the fascinating and iconic buildings/monuments in the world that are meant to be seen once in a lifetime. These famous landmarks will make you want to explore the world from a fresh perspective. It’s high time to unleash the traveler in you and head to an adventurous journey to capture these marvelous creations on your camera.

A UNESCO world heritage site, Sagrada Familia is a unique place of worship that has been in construction for over a century. Antoni Gaudi’s masterpiece is famous for being partially constructed to date. The intriguing architecture of Sagrada reminds one of a drip sandcastle but on closer inspection, you will find the ornately sculpted towers often described as ‘the bible written in stone’. After the death of Antoni Gaudi, the architectural work was left in the hands of weak technology of that time that kept his phenomenal artistic imagination limited to his sketches and scale plaster models. However, with the aid of modern technology, the marvel is expected to be finished by 2026. No matter if the church is completed or not, people from across the world come to see the vision of the great artist.

The Statue of Liberty, USA

While everyone knows what the statue of liberty is, most of us aren’t familiar with certain facts which are worth taking a glance. The statue of liberty is a colossal copper sculpture made by French architect Frederic Bartholdi that was inspired from his mother ‘Charlotte’. Not many people know that it was Laboulaye who proposed of gifting a great monument to mark both the union’s victory in the American Revolution and the abolition of slavery.

The statue of liberty was also aimed to inspire French people to fight for their own democracy against the repressive monarchy of Napolean III. Interestingly, this gigantic monument was the first thing that immigrants saw when they came to USA for a better life. The statue meant that they have arrived in America.

Due to the oxidation of copper over a long time, the color of lady liberty turned to green. Later on, the green coating was applied to the statue to prevent it from further damage. Every part of liberty signifies something for example- the crown bear seven spikes represents seven continents and seven oceans. Gifted by France to America, the statue was brought into 350 parts and assembled on Ellis Island.

Parthenon is a symbol of survival that went through centuries of reconstruction attempts, tragedies like plundering, fires, military assaults etc. At one point, this 2500 years old Greek temple was also turned into a Christian church and after that, it has seen nothing but destruction and degradation. Left mercilessly in the hands of time, the architectural marvel saw dust of time slipping past it telling stories of the ancient when it was a sacred place of worship. Despite the ruined structure, Parthenon attracts travelers and historians from all across the globe to capture the ruined memories of the past.

The fashion capital of the world, Paris is also known for Eiffel tower, an important landmark of the land with majestic architecture boasting the lavishness of the city and the talent of French artists to the world. Interestingly this fabulous landmark wasn’t much popular in the past and was disliked by the local Parisians for obstructing the breathtaking panorama of the city. The artisans, sculptors, painters and architects of Paris detested it and regarded the Eiffel tower as useless and monstrous in a public manifesto. Despite the hate, the tower survived and stands tall today as a symbol of romance and love.  Over time, the all-steel tower made its way to the heart of people throughout the world.  Now, whoever comes to Paris never forget to capture this architectural marvel in their camera.

Built by Mughal Emperor Shah Jahan, Taj Mahal is recognized by its unique white domed marble structure with four minarets adorning it (an amalgamation of Persian, Turkish and Indian architectural styles) and the story behind its construction. This architectural masterpiece is a symbol of profound love of Shah Jahan for his wife who died after giving birth to his 14th child.  Many people confuse Taj Mahal to be a palace but it is in fact a mausoleum, the resting place of Mumtaj Mahal, the wife of Shah Jahan. Displaying different moods, the Taj Mahal is beauty personified. The Mughal ruler also planned to construct a black mausoleum for himself mirroring Taj mahal, unfortunately, the plan never saw the light of the day and Taj Mahal became his ultimate creation.

The Great Sphinx of Giza, Egypt

There is a mystery in the air of Egypt. The great sphinx of Giza is one such mystery that boggles the mind of genius even today. The great sphinx of Giza is regarded as one of the biggest and most ancient statues of the world. With a body of a lion and head of a man that resembles Egyptian kinds i.e. pharaohs, little is known about its construction of this mythical marvel as to who made it, how he made it, what was the technique used for constructing.  In past, many noted archeologists and historians speculated that there are hidden chambers beneath the sphinx that contain the great knowledge from Atlantis but all vent in vain as no chamber was found. Despite the furor surrounding the great sphinx of Giza, travelers visit Egypt only to witness the grandeur mythical face of Egyptian god ‘Anubis’. Viewing sphinx at night will take you back to the era when pharaoh rules, the sight is truly ethereal.

You might have hummed the rhyme ‘London Bridge is falling down, my fair lady’ in your childhood. But did you know that the poem is based on true events? Ever since the rule of the Roman Empire, the iconic landmark of London has undergone nothing but repairs, demolishment, rebuilding. Since the bridge was not meant to take the load of increasing number of pedestrians or vehicles, it kept on sinking bit by bit. As a result, it was sold to an American businessman, Robert P. McCulloch in 1967. The original bridge was relocated to Lake Havasu City, Arizona. Soon after that, the bridge was rebuilt (this time without the twin towers) on river Thames and the city gained its major landmark once again.

7 MOST DANGEROUS PLACES TO VISIT IN THE WORLD; VISIT AT YOUR OWN RISK!!