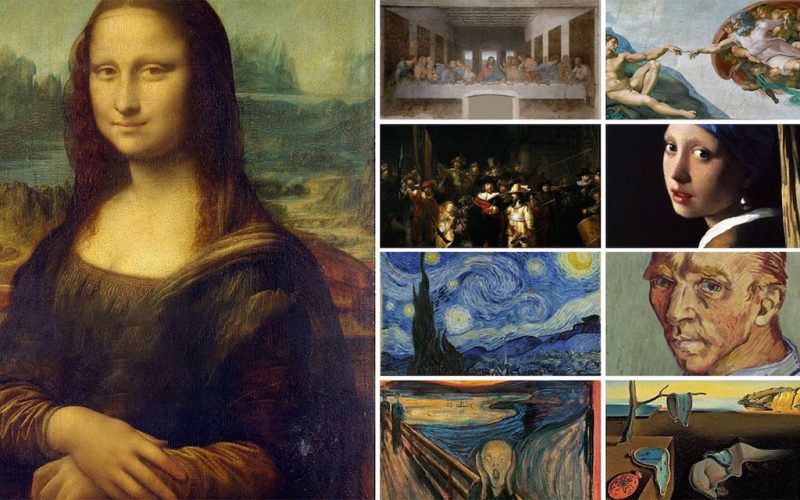 Throughout the history of art, we all have come across the names of outstanding painters who have changed the meaning of art, transcended time and culture, pushed boundaries and made startling innovations through their surreal artwork that leave us amazed even today. We have put together a list of greatest painters of all time or more like geniuses who have bestowed us with their truly inspiring and profound creations.  No matter if you are an art connoisseur or not, you might have heard about the masterpieces made by these famous painters in the world.  Let’s take a look at their best paintings that simply win our hearts and cast their spell on us.

A man of many talents, Leonardo Da Vinci was not only an Italian painter but a sculptor, polymath, engineer, inventor, mathematician, architect, musician, inventor, botanist among other things. He was a genius whose visually pleasing artworks and inventions were way beyond his time which is why he is known as the greatest painter of all time. His greatest artwork ‘Monalisa’, whose smile is still considered a subject of conjecture, is the most famous painting in the history of western art. Da Vinci’s signature triangular composition is still used by painters and artists all over the world. His style of using a sudden gradation of tone to capture human expressions, gestures and emotions is difficult to replicate. Other famous paintings of this genius painter are ‘The Last Supper’, ‘Vitruvian Man’, ‘Salvador Mundi’ and ‘Lady with an Ermine’.

Pablo Picasso was a pioneer of cubism, a revolutionary painter who paved the way for European painting and sculpture that broke the practices used in the past. He showed the world how classical art can be used to create something fresh and modern. It wouldn’t be wrong to say that Picasso added spice to the classical painting techniques and introduced new ways and methods in his great artworks that earned him the laurel of being one of the greatest painters in the world. His most famous painting ‘Guernica’ (shows the horrible tragedies of war and sufferings) was highly inspired by the bombings of Guernica, Spain during the Spanish Civil War. Other famous creations of this genius of a painter are ‘Les Demoiselles d’avignon’, ‘The Weeping Women’, ‘The Old Guitarist’ and ‘LE RÊVE’.

Michelangelo never really considered himself as a painter as he had a low opinion of paintings. He identified himself more as a ‘sculptor’. Like ‘Da Vinci’, he was also a ‘Renaissance Man’ whose artwork exerted an unparalleled influence on the development of Western art. His paintings mostly depicted a sensual yet powerful portrayal of the human body. His paintings ‘Sistine Chapel Ceiling’, ‘The Last Judgement’, ‘The Creation of Adam’ are considered some of the best in the world. Hence, despite his reluctance to be known as a painter, these masterpieces have made him some of the best painters of all time.

A Dutch post-impressionist painter, Van Gogh wasn’t successful during his lifetime and rose to fame, a decade after his death. He is known for using bold colors to capturing the subtle human emotions with outmost honesty. His signature rough oil paintings are filled with dramatic and expressive brushstrokes and bold colors that amplify their beauty. Some of his truly impressive and inspiring paintings are ‘The Starry Night’, ‘Bedroom in Arles’, ‘Sunflowers’ and ‘Café Terrace at Night’. Vincent Van Gogh was indeed some of the best painters of all time that gave a roadmap to modern art.

Best known for his painting ‘Girl with a Pearl Earring’, Johannes Vermeer was a genius in portraying the domestic interior scenes of middle-class life. He used expensive pigments in his paintings and was renowned for creatively using light in his artwork and capturing the sense of atmosphere. His notable paintings include- ‘The Milkmaid’, ‘View of Delft’, ‘The Art of Painting’ and ‘The Little Street’. It would be unfair to cross off Vermeer from this list of greater painters of all time.

Whenever the history of art is discussed, the name of Rembrandt appears effortlessly. Rembrandt was the greatest visual artist in the world whose work illustrated different styles and subjects of paintings.  His iconic work in ‘The Night Watch’, ‘The Storm on the Sea of Galilee’, ‘The Return of the Prodigal Son’, ‘A Polish Nobleman’ expresses vivid realism that displays honesty and sincerity. One can easily witness his mastery where he had skillfully used light in his best paintings and artworks.  Rembrandt is undoubtedly some of the best painters, the world has ever seen.

Oscar-Claude Monet was the founder of French impressionist paintings who experimented with various techniques and is credited with launching the entire art movement. His painting masterpiece ‘Impression, Sunrise’ shows his fascination for water and light. Monet is perhaps the most loved painters of all time whose rapid brushstrokes and use of broken and vivid colors are still practiced by art lovers across the globe. Some of his other famous paintings are- ‘Woman with a Parasol’, ‘San Giorgio Maggiore at Dusk’, ‘The Artist’s Garden at Giverny’ and ‘The Water Lily Pond’.

The architect of the high renaissance, Raphael together with Da Vinci and Michelangelo forms the trinity of great masters of that period.  His outlandish creative portrayal of Neoplatonic ideal of human grandeur is cherished by art connoisseurs all over the globe. Some of his fabulous paintings are ‘The School of Athens’, ‘Transfiguration’, ‘The Sistine Madonna’ and ‘Stanza della Segnatura’. Raphael was a master in depicting real emotion in great detail that makes his paintings appear as if they have come to live. He was an ideal balanced painter whose paintings are considered cornerstones of Renaissance art.

Famous for dramatically using searing lights, bold compositions and rich shadows in his masterpieces, Caravaggio’s paintings consist of realistic observations of human emotions and their state. His contribution to the development of painting derived inspiration for the Baroque school of painting. Caravaggio is considered some of the outstanding painters in the history of art whose artworks are still studied and analyzed by scholars. Some of his absolutely gorgeous paintings include – ‘The Calling of St. Matthew’, ‘Judith Beheading’, ‘Young Sick Bacchus’, and ‘Supper at Emmaus’.

Salvador Dali was a surrealist painter who was known for his strikingly bizarre images. He was one of the prolific painters in 20th century who was highly influenced by Cubism. His work depicts the mixed media artwork of random images that display deep emotions from sexual anxieties to fear of betrayal. Most of his works show some sort of dream sequence that draws hallucinatory characters. His work is considered as some of the profound masterpieces in the world. Here are some famous paintings by Salvador Dali- ‘The Persistence’, ‘Metamorphosis of Narcissus’, and ‘Galatea of the Spheres’.

Upcoming Marathons in Delhi-NCR to Work up Your Adrenaline