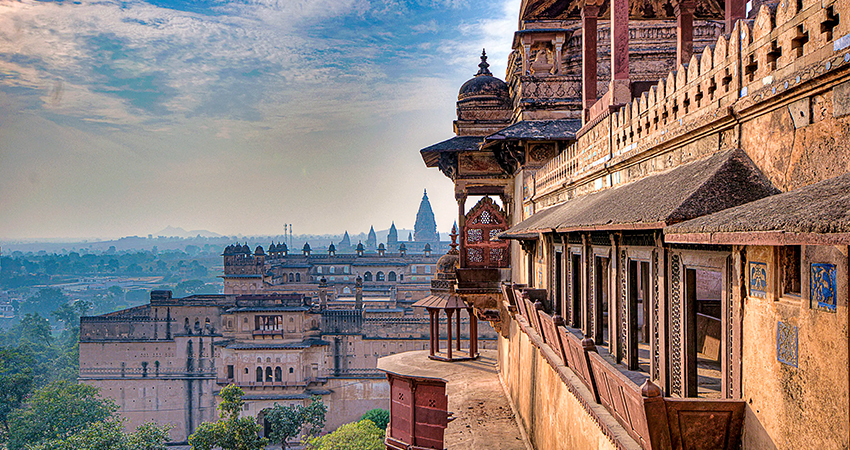 There is no doubt that India is a culturally flourishing country and there is a lot to be seen in every part of it but have you ever wondered what is in the heart of India? The answer is Madhya Pradesh and its beauty of art, architecture, faith, love, history, and nature.

This place defines the perfect partnership between what beauty man brought to the earth and what all contents the earth added to this perfect dish, garnishing it with ages of evolution and faith of mankind in its existence. Here are some of the mind-blowing places that you can visit while in Madhya Pradesh which will leave no stone unturned to make you spellbound.

Madhya Pradesh is the perfect place if you want to have a taste of Forest life. Being almost in the middle of the country, Madhya Pradesh sets out for a natural treasure that not only includes beautiful landscapes but a wide variety of animals, birds, and reptiles. All credited to the favorable weather conditions here, you can have an acquaintance with a variety of creatures. 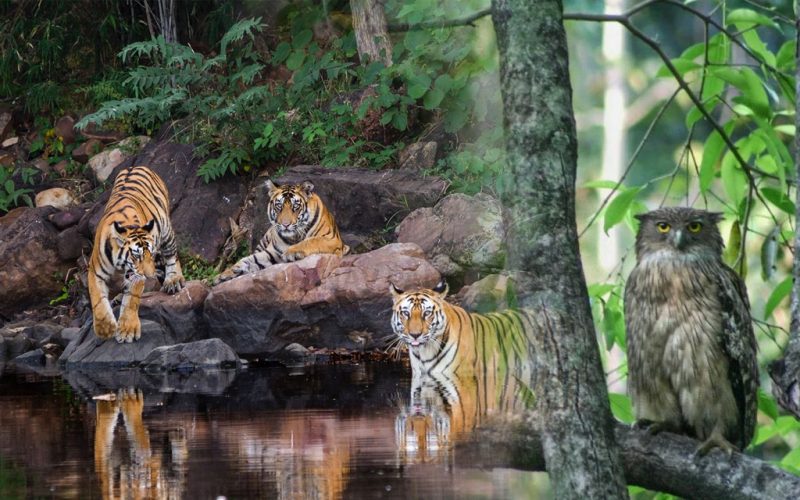 This park which is based in Chattarpur makes for an environmental treat for the people who are hungry for pure Jungle Safari. With Renah Falls in the middle of the land and all the colorful stone paintings which hold your hands to take you to the neolithic period, there are Royal Tigers who delve into their natural habitat in this park. You can simply book a Jeep ride to visit their neighborhood. 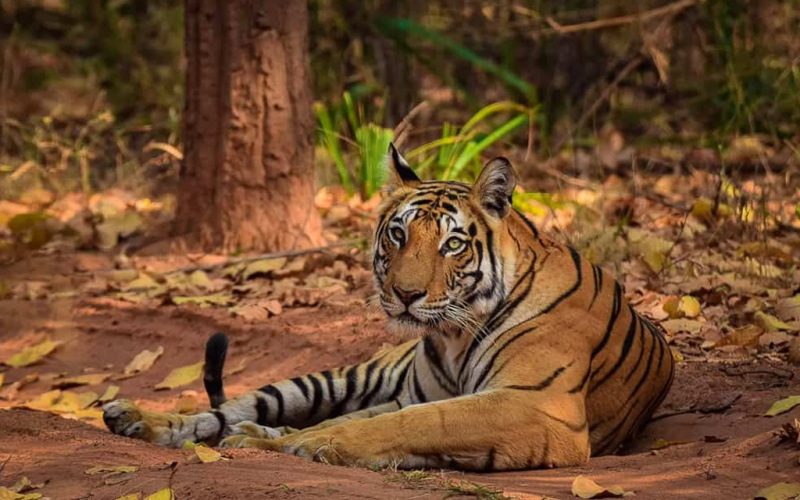 Another beautiful place where you can find Royal Bengal Tigers in Bandhavgarh National Park. But that’s not what makes it special but its favorable topography gives home to almost 28 species of mammals, 250 species of birds and 70 species of butterflies. 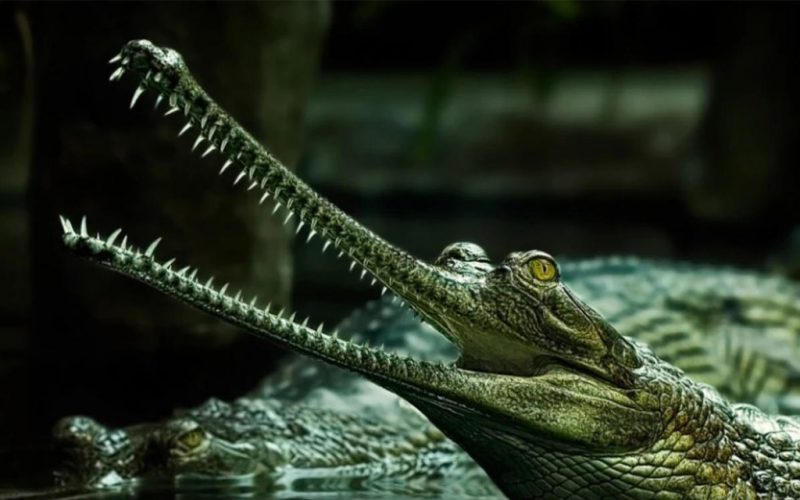 You might need time to visit this one. Based near Raneh Falls and Khajuraho Temples, Ken Ghariyal Sanctuary is a home for numerous species of Crocodiles. It might take some time out of your holiday but will give you a pure taste of Safari in return. That’s what the Ghariyal out there boasts about themselves.

ALL WONDERS OF NATURE IN ONE LAND

Madhya Pradesh was never behind in the lane when nature sprinkled its love on mother Earth. Here are some proofs. 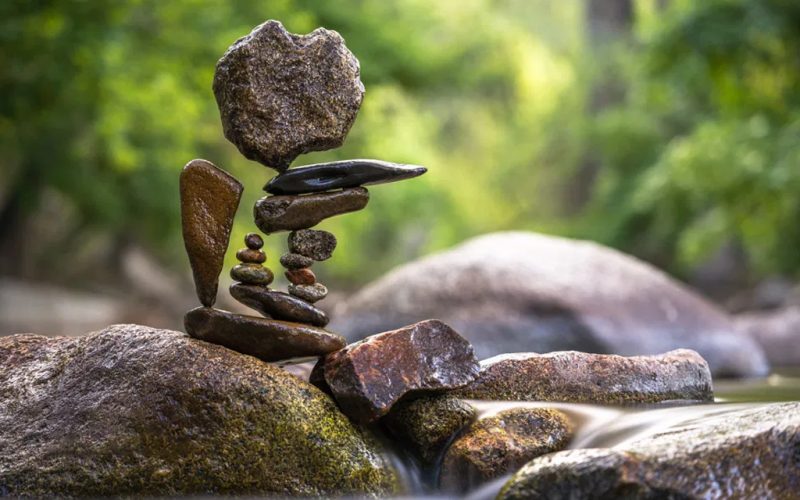 This beautiful wonder of nature was made due to a volcanic eruption, but it doesn’t leave a chance to make your head scratch with amazement that two rocks are simply placed on each other with little to no contact. What will amaze you more would be the history of all kinds of earthquakes that it has survived. 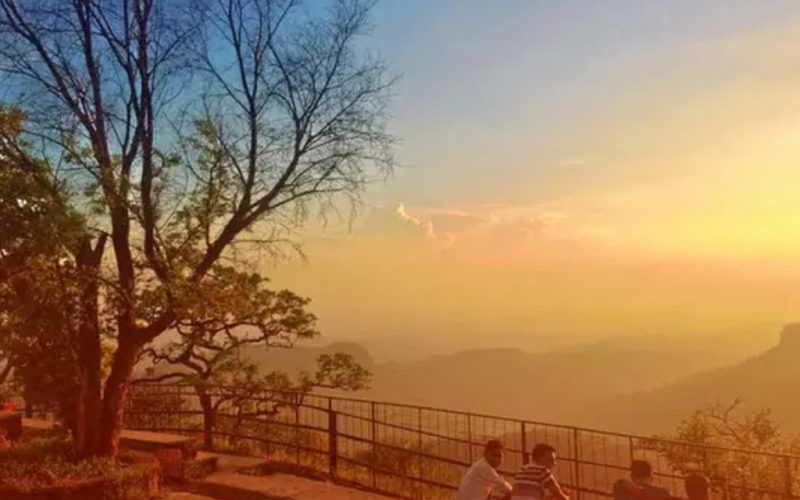 Just when sun rays play with white dots of mist and turn into a natural wonder of multiple colors. That is what Dhoopgarh promises to offer you. It is a place for hikers and trekkers surprising them with waterfalls, deep dense forests and mystical colored rocks in between. 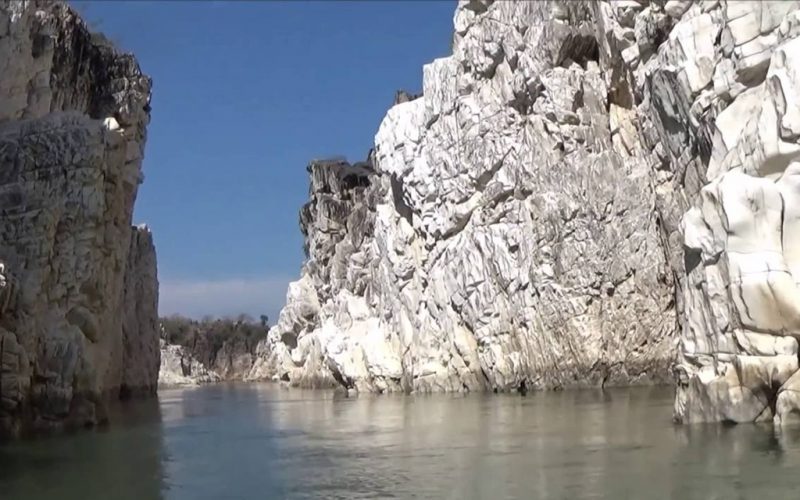 You can be mesmerized by the giant rocks of Santorini or Lake Como, but if you ever give a chance to the rocks of Bhedaghat, you might want to forget them. The giant pieces through which your boat passes on the layer of water give you a feel of how Giant nature is and you are simply a speck in it. 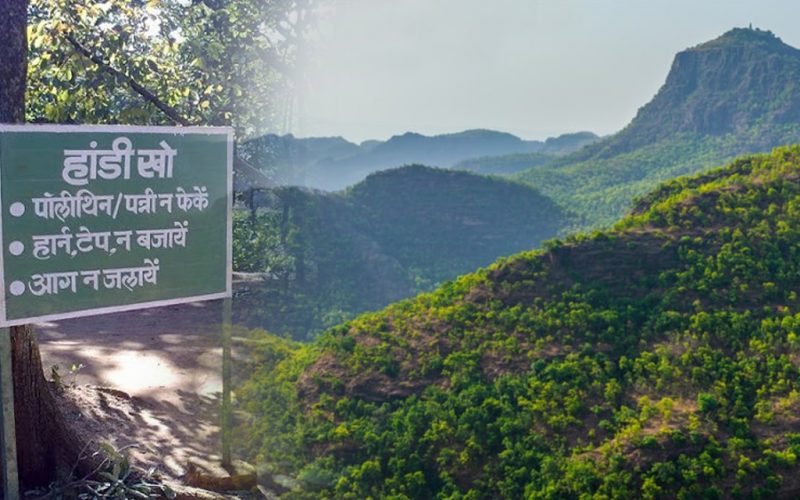 When was the last time you had an experience of visiting rainforests? Not lately, I guess. Handi Khoh allows you to feel the same. In this beautiful ravine, you can have minor streams of water with a bit of mist and lush green forests placed in one. It purely serves as a cocktail for people who look for more serene and lesser-visited places. 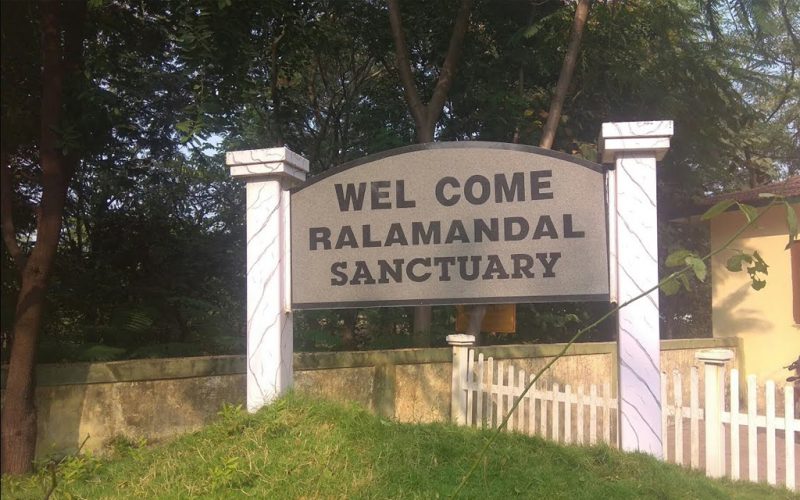 If you are missing the days when peacocks used to dance in that one shower of rain, Ralamandal is bound to fascinate you with its beauty. It is famous as the popular weekend getaway as it takes a little time to woo you with its mystical yet royal creatures.

A DRIP OF WATER

It has been said that heavens shower their blessings in the form of rain but Madhya Pradesh has some waterfalls to restore those blessings. 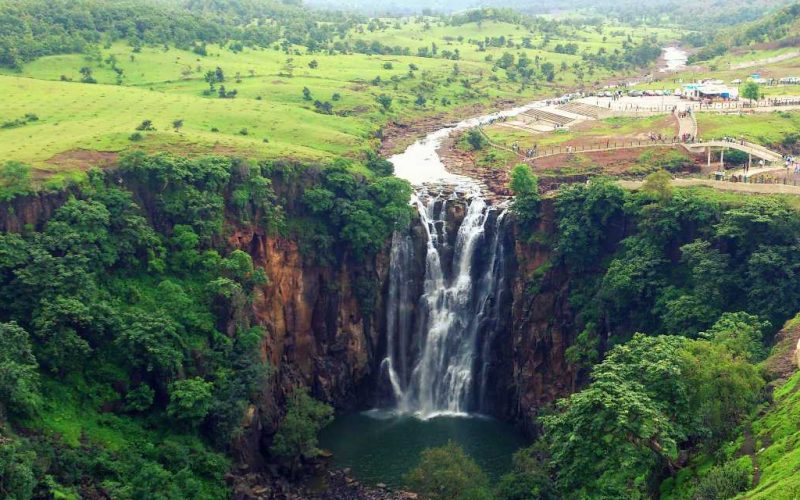 All those mangroves which touch water through its reflection and yet never touch it. Patalpani, as the name suggests, gets you on an introduction to the waterfall whose depth is unknown. It is a popular belief that the water which comes from the high mountains reach to the underworld here. Visit here for more stories, you might not want to miss them.

A calmer, serene, and tranquil form of water. But at its best beauty during rainy seasons. Being in the middle of the country MP experiences enough rains but Rajat Pratap Falls gives you the minor stream of the waterfall which will wash your tiredness and rejuvenates you for the journey ahead. 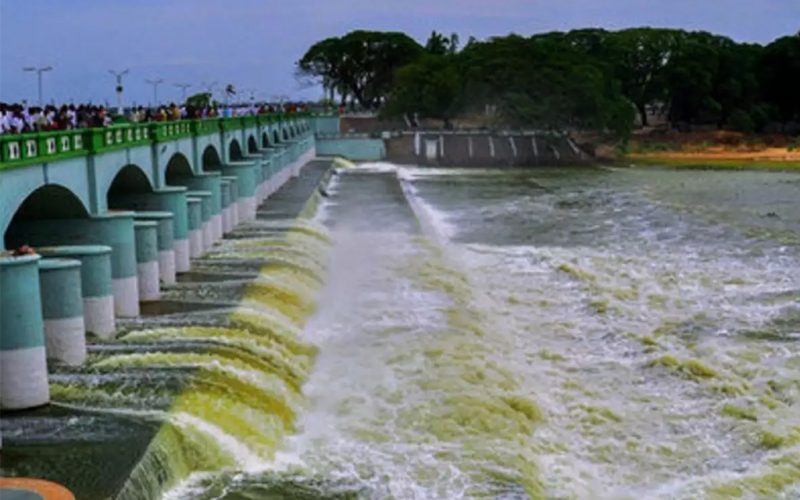 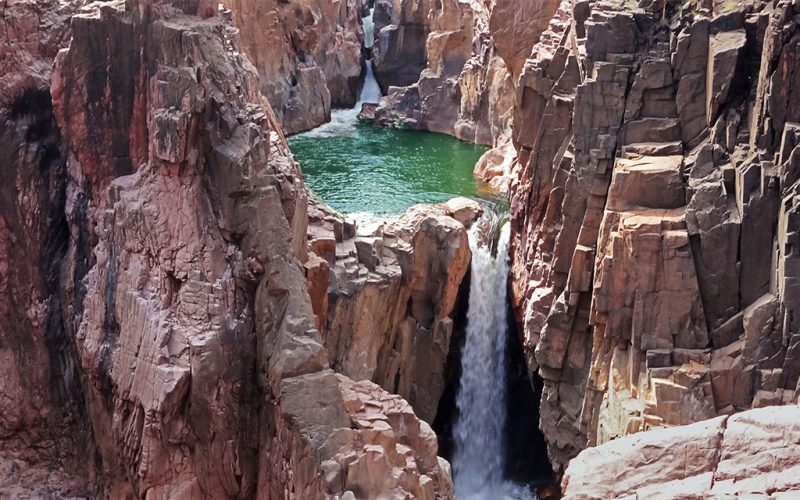 Raneh Falls gets the mighty roar of waterfalls in Madhya Pradesh. A tremendous yet beautiful sight to have while you are visiting this land. It is one of the most famous tourist attractions in this land and this is that one place which announces it’s an arrival before your map does. 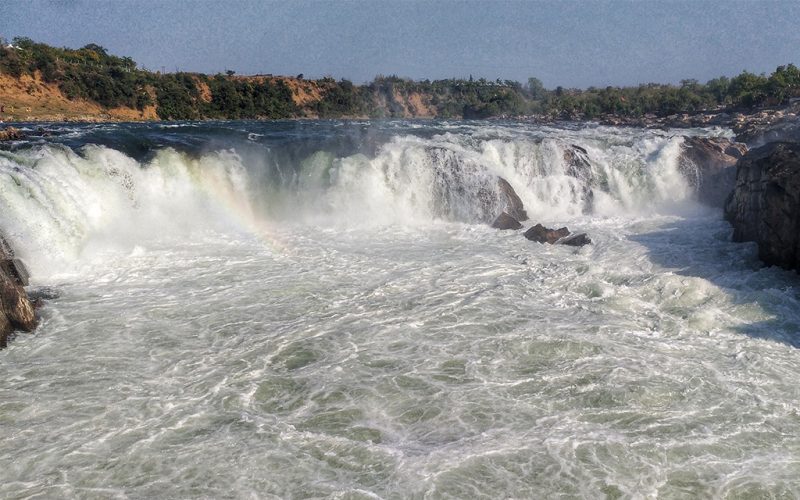 As per his name, dhuandhar falls contains a spectacular vision of running water falling with a foaminess. It has all the beauty to make you spellbound as the water takes a different incarnation here. Somewhere between rage and calm.

AN EXPERIENCE BELOW THE EARTH

What lies beneath the surface has always been a question for a geologist but this land can make any person bend a little bit. 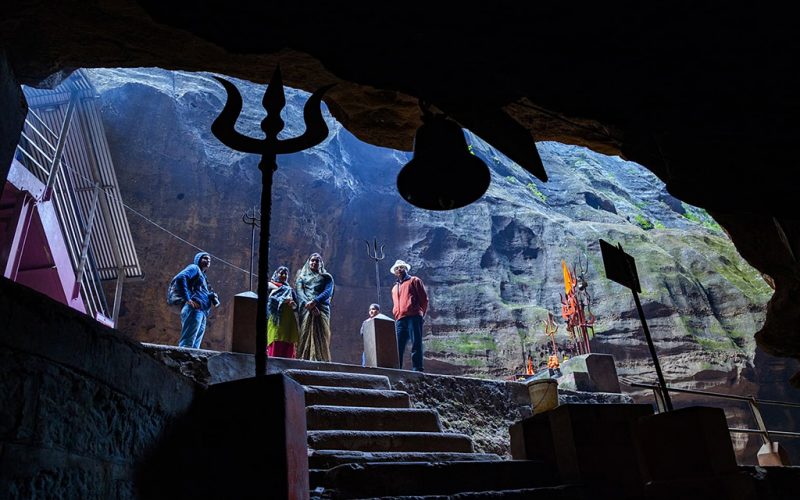 A perfect combination of beliefs and amazement, Jatashankar caves tend to amaze you with its 108 Shiva Lingas placed in the cave inside. It has been said that Lord Shiva took shelter here to save himself from the rage of Bhasmasura. It is also a shrine of God Shiva and Goddess Parvati. 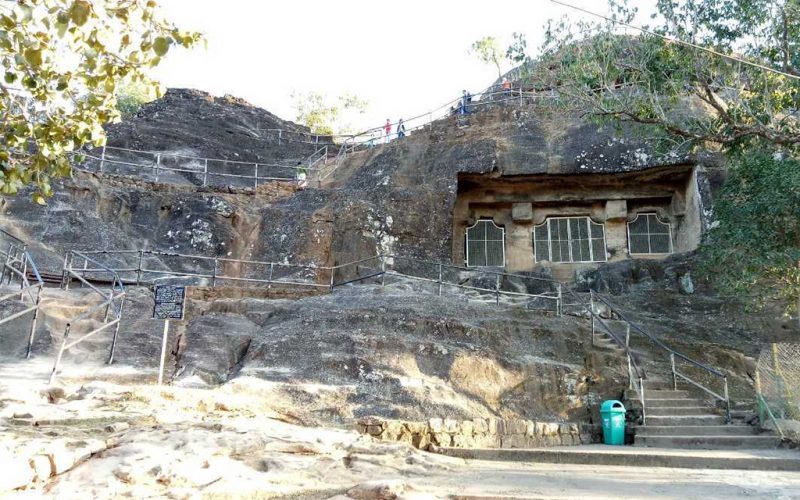 A clear witness of what was written in ancient mythologies. Pandav Caves situated in Pipariya district speaks for the ancient tales. The story behind these caves is that Pandavas spent a huge time of their exile in these caves while being away from home. You might feel very ancestral here. 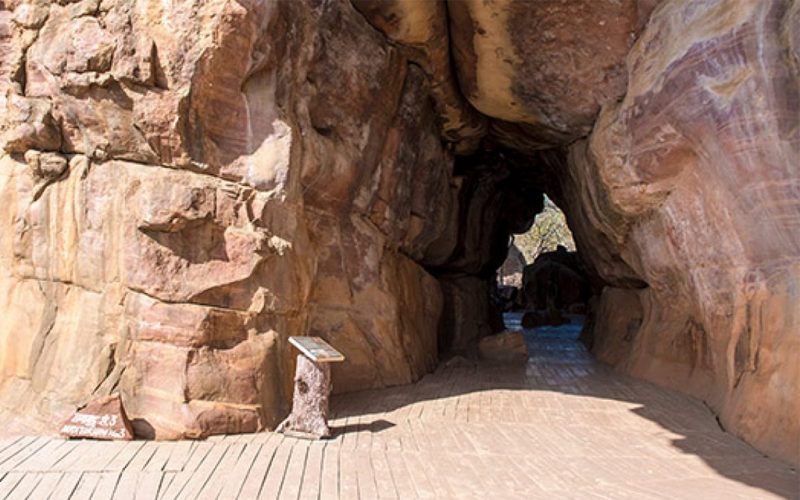 As UNESCO has considered it among 5000 world heritage sites, it is bound to amaze you with more than 500 rock shelters and beautiful paintings which indicates the dawn of The South Asian stone age.

THE LAND OF FAITH AND ART

India has always been a land of multiple religions and varied faiths. It seems Madhya Pradesh has them all. 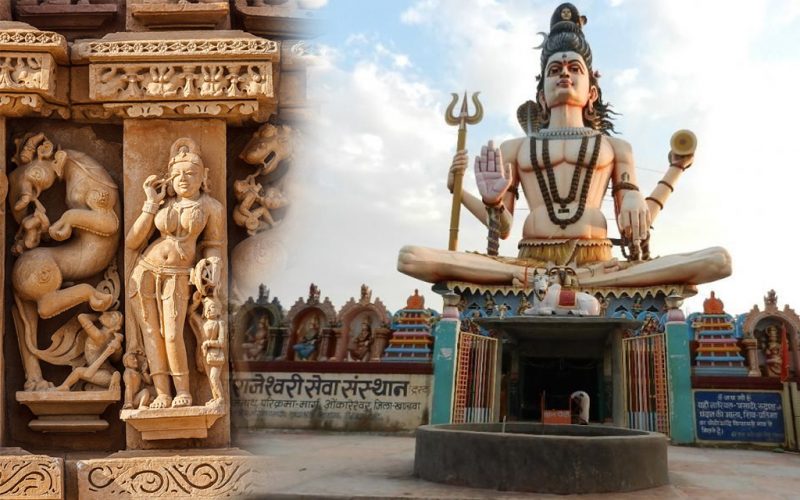 If you call Madhya Pradesh, a land of pilgrims that you shouldn’t doubt your facts a bit. The three beautiful pilgrimage destinations of Maheshwar, Omkareshwar, and Ujjain dedicated to Lord Shiva speaks for itself. Though they have their separate significance in the history and art section, what binds them together is the beauty of faith. 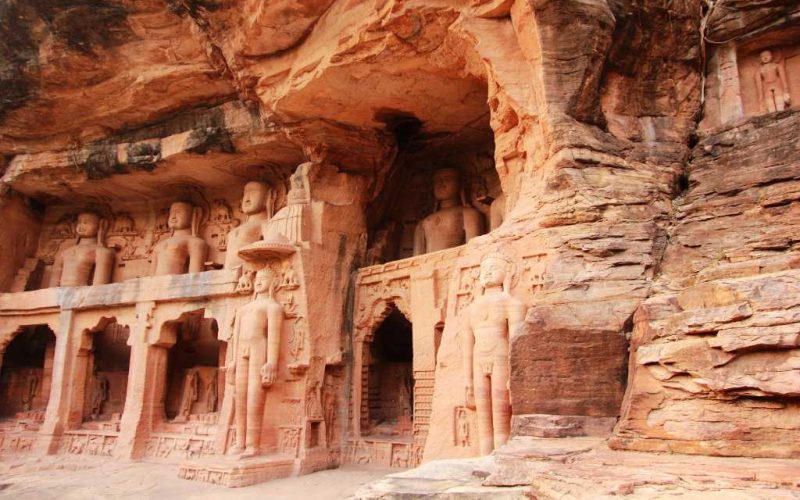 The spectacular Jain Monument is a sight to behold with its carvings and idols in the mountains. Situated near the city of Gwalior, it has approximately 500 carvings in the Gopalachari parvat.

Dedicated to Lord Vishnu, the meaning lies in its name which stands for the one who has 5 arms. Made by the Rajputs of Bundela, Chaturbhuj temple amazes you with its significant architecture and true to the core spiritualism. 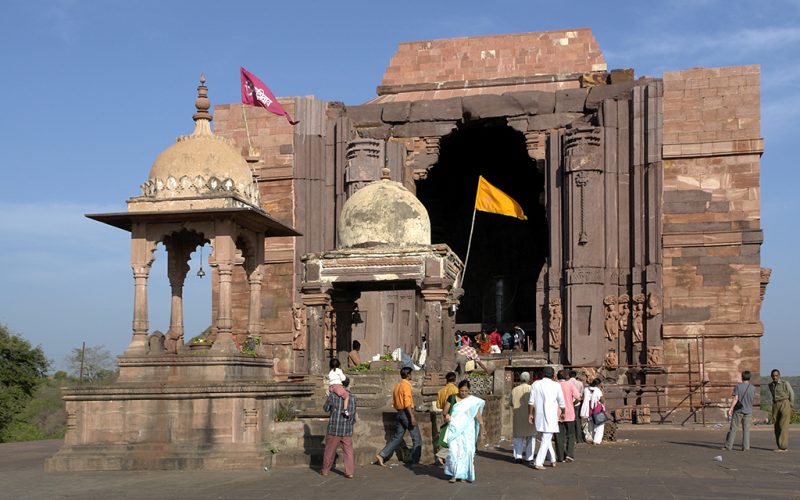 A beautifully carved door and rustic colored walls welcome you to the Chaturbhuj Temples which is also known as the Somnath of the east. The most beautiful fact about this temple is it never completed its construction but it gives you a complete feeling of faith. 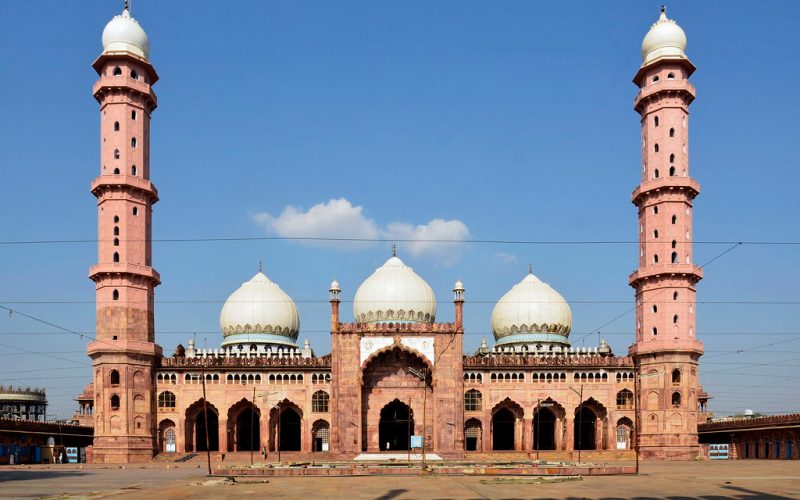 Taj -ul- masjid or crown of mosques is one of the biggest mosques in the country. Located in the city of Bhopal, this beautiful white religious place seems no less than a monument itself. Made up of all white in the middle but pink marbled towers on four sides along with the floor make up for a magical welcome carpet. 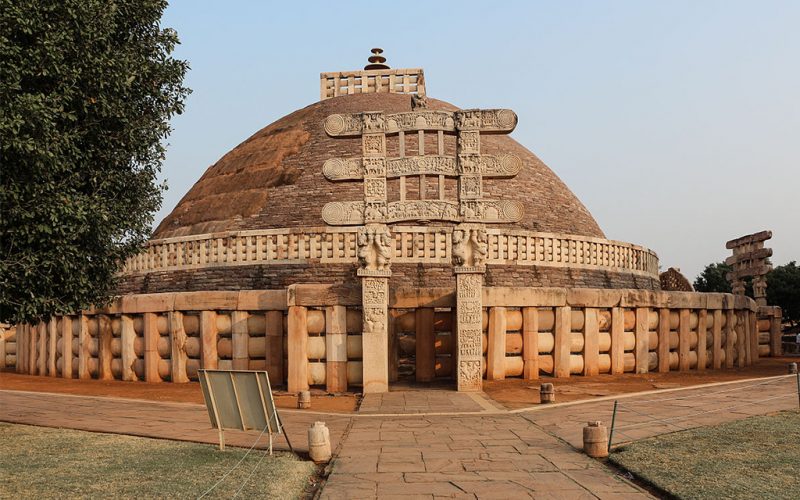 Madhya Pradesh remains unvisited if you don’t visit Sanchi Stupa. Famous worldwide because of its beautiful dome and a vision to see “the gate”, it holds the place in tourist’s hearts and makes its significant places to visit on your bucket list. Very significant for Buddhism, here lies the mortal remains of Lord Buddha.

A SNEAK PEAK IN THE PAST 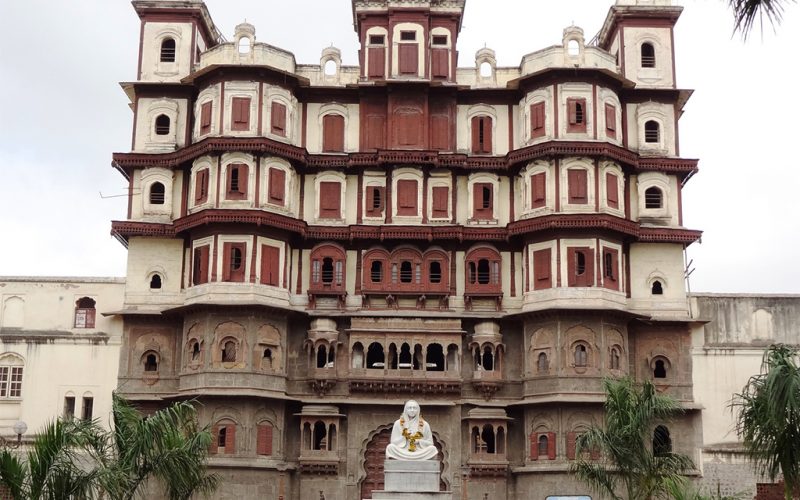 A huge building stretched around acres and a beautiful garden guarded by long palm trees on the borders and a cannon in the front, Rajwada is full proof evidence of the luxurious life that our Royal ancestors had. Offering more on the inside, it can be your heaven if you are interested in architecture because this seven-storeyed building speaks for its regalness. 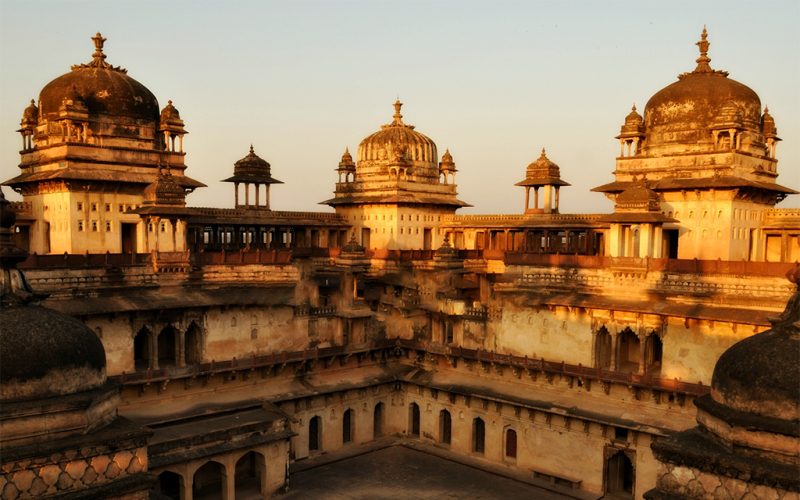 Orchha Fort combined with Orchha reserve is a complete package of history and nature itself. The visions that it offers to its visitors are sometimes beyond the history books or sometimes beyond your imagination as well. A few kilometers away from Jhansi, among the dozens of sites that it offers you are Raja Mahal, Jahangir Mahal, Rai Parveen Mahal, Phool Bagh, and Sheesh Mahal. 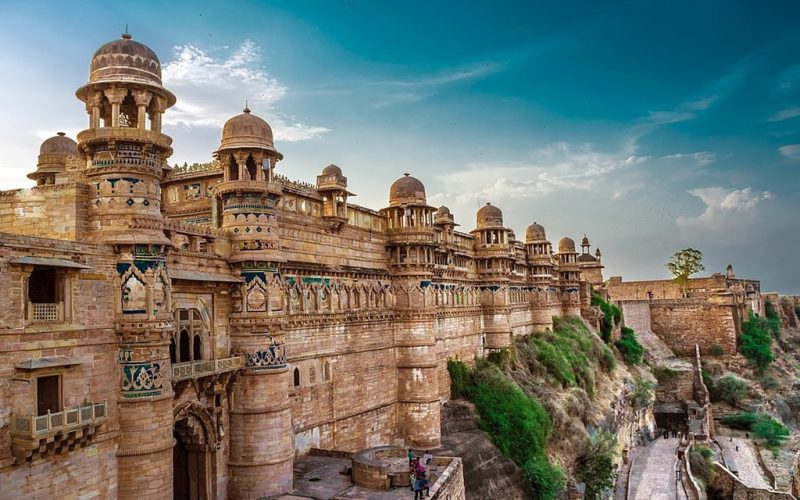 This is something you might have a look at while you were going through your General Knowledge books and this place will speak for its historical importance when you visit it. A huge mountain on one side with gigantic walls and a royal entrance on the other, it won’t fail to amaze you. 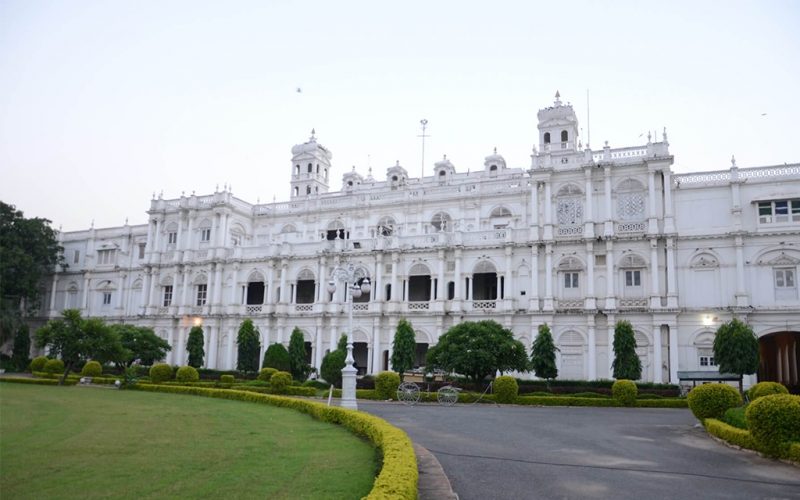 If you are a true history lover you can’t miss on the extravagant bonanza Jai Vilas Palace offers with a pure sign of luxury and larger than life lifestyle of the Royal Scindia Family. Apart from all the history, there is a complete museum which goes up to 35 rooms to give you a buffet of the past.

If you think traveling through what land and creations offer you was enough, have a look at the culture of this state which can amuse you and make you wonder at the same time. 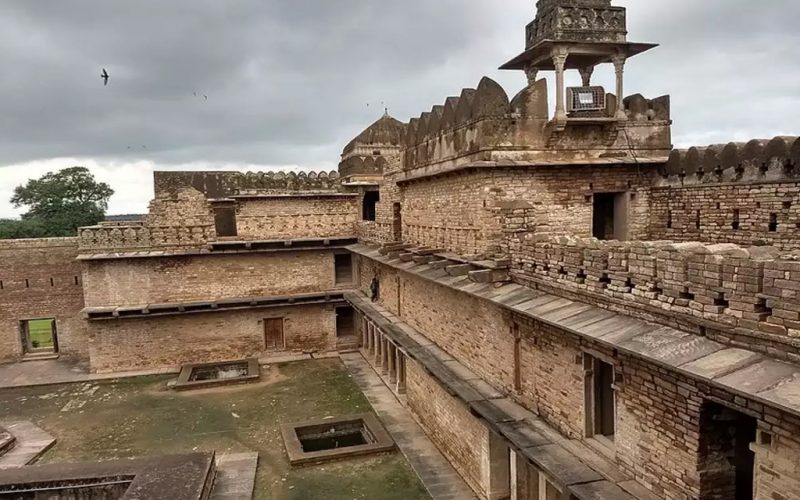 Remember?, “O Stree, kal aana” !! Madhya Pradesh has that mysterious cinematic place of Chanderi and this city has its mysteries, folklore, stories and never to be forgotten but sure to be visited forts.

The city which holds for the past and ancient significance, its regional stories inspire a blockbuster and critically acclaimed movie. Imagine if it makes for your entertainment on the screen, it would certainly make your heartbeat go for a toss if you visit it. 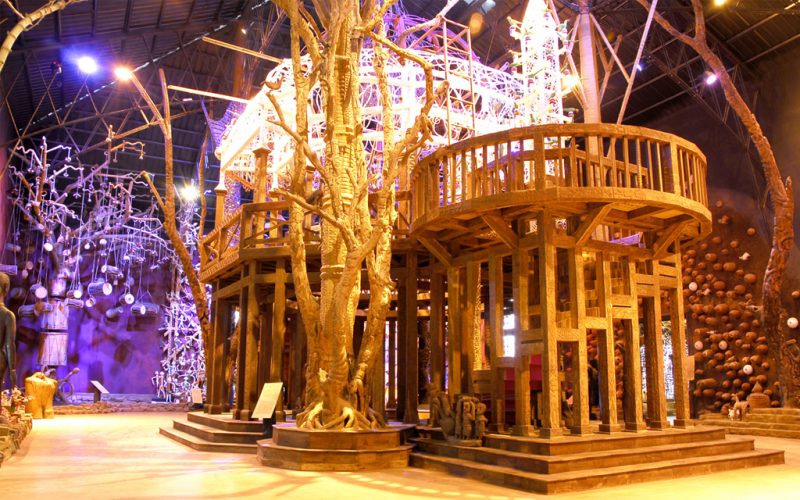 I understand that visiting all the magnificent places and sites in this beautiful land cuts off a huge chunk of your vacation time. But what is the use of simply visiting all the places and not touching the lifestyle, the culture and traditions of the place? Henceforth, State Tribal Museum becomes the perfect amalgamation of all these things to be served to you in one place. Binding all the beauty which this land has in a few words is very difficult and beyond reach. Though, experiencing it through your own eyes and feeling the vibe while becoming a part of it can make justice to the land. 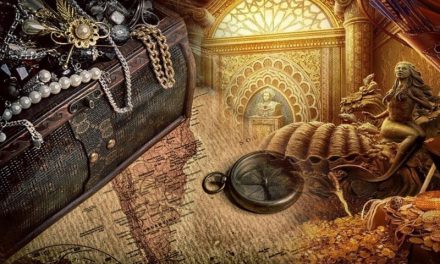 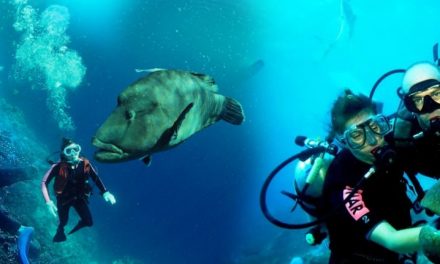