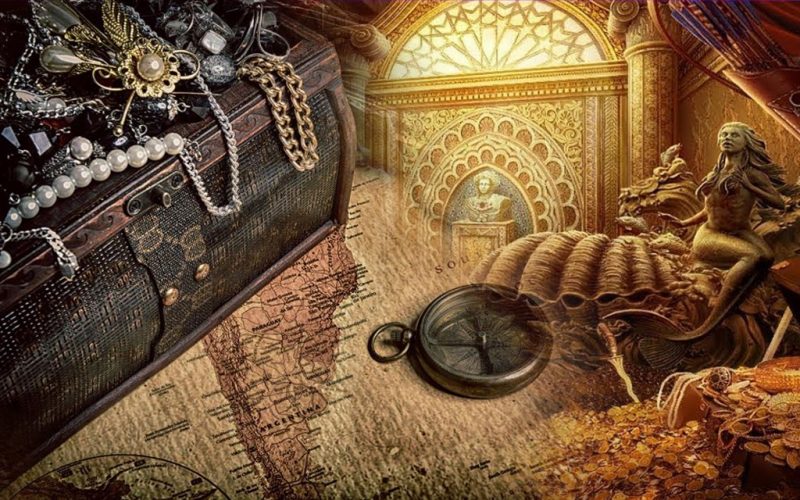 History bears the witness of stolen treasures and the ones that have gone missing deep into the unknown abyss. Scholars believe that some of these unaccounted treasures have already vanished into thin air, but there are treasures that spark hope. From jewels to masterpiece paintings, here are hidden treasures on earth that have never been found. So gear up folks and prepare yourself for a treasure hunt that will change your life. Even though time has swept these riches under its rug, brought them to the ocean or hidden away from the world in plain sight (who knows?), you have a chance to dig the treasure and claim it before anyone else does.

It is said that to earn the favor of Arabs, Italian Fascist Mussolini sought an alliance with them and was bestowed with the title ‘Protector of Islam’. He was presented with an elaborate and rich sword by a Berber leader who was loyal to the fascist power. The sword is said to be decorated in an arabesque style with fine gold finishing and believed to have been of 200,000 Italian liras at that time. Interestingly, the sword was commissioned by Mussolini himself and was manufactured at Florence, Italy by Picchiani e Barlacchi. The sword was last seen at a display in Mussolini’s summerhouse which was plundered by the communists only never to be seen again. Imagine how much the ‘sword of Islam’ will worth today.

Johannes Vermeer was an iconic Dutch painter whose masterpiece ‘The Concert’ dating from 1664 was stolen along with other precious paintings during the infamous Isabella Stewart Gardner Museum theft in 1990. The painting is believed to be auctioned in the black market by a crime syndicate in the early 2000s. FBI is still unable to find this painting and other artifacts concerned with the theft. It is now alleged that the masterpiece is possessed by another crime lord. Now that is interesting, isn’t it?

The opulent Patiala necklace was crafted by Cartier for Bhupinder Singh, the Maharaja of the state of Patiala in India. Made in Paris in 1928, the necklace caught the jealous eyes of many as it was dripped with more than 2000 thousand diamond and precious Burmese rubies. The stupendous luxurious display of wealth of Maharaja of Patiala disappeared just 20 years later from the Royal treasury following the death of Bhupinder Singh. It was at Sotheby’s auction in Geneva, the necklace reappeared. Some parts of it were also found in 1998 at a second-hand jewelry shop in London. However, some remnants (Burmese rubies) of the necklace are still not found yet.

Constructed in 18th century Prussia, Amber room is a room bejeweled with amber, gold-gilded mosaics, intricate carvings and mirrors. The room was shifted to Russia later on and was adorned with extra 13000 pounds of amber. But at the time of World War II, the room was invaded by the Nazi Germans and its panels and artwork were stolen and taken to Germany. The whereabouts of the amber room are still not known today. The amber room was re-created after that (you can see the re-created version in the Catherine Palace), but nothing can be said about the original elements that have vanished into thin air.

The legendary treasure train is believed to be hidden by Nazi troops in a mountain as the Germans fled the area between Wroclaw and Walbrzych in southwestern Poland at the end of World War II. Legend has it that the fabled train contains precious jewels, gold and other treasures looted by the Nazi Germans during World War II. While historians deny the existence of such a train, but researchers strongly believe that the train actually exists. No matter what historians say, believers know that there is a treasure trove worth billions waiting to be found.

The Scepter of Dagobert

Dating from 7th century, the scepter of Dagobert was created for king Dagobert for his coronation. This precious jewel once adorned as the finest jewels in France and was made of solid gold. The scepter was stolen in 1795 and it’s whereabouts are still unknown.

The famed yellow diamond of the Medici family was valued at $750,000 in the late 17th century. With the demise of the last Medici, the diamond weighing 137.27 carats was passed to the imperial family of Australia. Towards the early part of the 20th century, the diamond was stolen and its whereabouts after that are unknown. Scholars allege that the diamond might have been broken into small stones and sold to someone. No matter what, whoever possesses this diamond or the stones must be fortunate. Even if the diamond is not sold, would you want to miss an opportunity to get your hands on a fortune worth jewel?

The Tsars of Russia were known to shower their ladies (during Easter and Anniversaries) with eggs made of precious stone sand metal crafted by the jeweler Fabergé. It is said that the craftsmanship of these luxurious eggs is the finest thing the world has ever seen.  In 1917, the treasures of Tsar’s family were confiscated by the Bolshevik and they were meant to be taken to Kremlin. However, 8 of these precious eggs mysteriously got lost during transport. In 2012, one of the high-valuable eggs was found by an American scrap metal dealer. But good news for you, there are 7 such eggs still lurking the shadows somewhere. You just have to be curious enough to find those.

Built in 1800, the royal casket was created for Polish Princess Izabela Dorota Czartoryska with the finest carvings and contained ivory, gold, portraits of noble royals and silver. When the 2nd World War approached the country, this casket was transported to the Czartorysky Family Museum. When the Germans attacked the country, the casket was looted by the soldiers following the betrayal by an ethnic german worker who gave them the location of the hidden treasure. After that, no one ever found the contents of the royal casket. Do the soldiers dig them deep into the earth so that no one can discover the riches or are they hidden in plain sight that no one has managed to decode? Guess we won’t be able to know, unless someone actually figures these things out.

It is said the most infamous pirate in history, Blackbeard who terrorized the Caribbean hid his massive fortune (which he plundered throughout his pirate years) but never told anyone of its location. Treasure hunters are on the lookout of his looted riches and seek clues from every nook and crannies Blackbeard explored. The pirate meets his end in 1718 when British Lieutenant Robert Maynard decapitated him and hung his head from the bowsprit of his ship as a grisly trophy. Some treasure hunters have given the possibility of his stash being hidden on the Caribbean Islands, Virginia’s Chesapeake Bay, and the caves of the Cayman Islands.