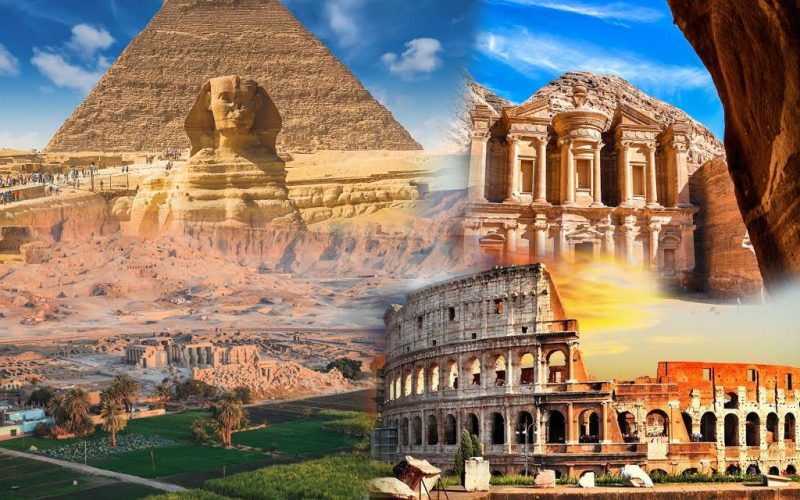 Tired of exploring clichéd mountains, deserts, coastlines, forests? Why not put something different (interesting and offbeat) on your travel bucket list for this year? Our earth is a Pandora’s Box with hidden gorgeous landscapes that are unspoiled and have survived centuries. Visiting such places is now no tough task thanks to the internet. We bring you the most amazing and coolest underground places on earth that are totally worth travelling in 2020.

The tomb of the first Qin emperor is one of the greatest archeological discoveries of time the puzzle of which hasn’t been solved yet. Buried beneath the land for thousands of years, this strange clay-sealed archeological wonders is wrapped in enigmatic history. The unique and realistic-looking figurines of terracotta warriors, infantrymen, horses, chariots were expected to be constructed when the emperor was alive so that he could oversee every aspect of construction.

The first emperor Qin Shihuangdi was known to possess an interest in stunning innovations. He is also credited for the construction of the Great Wall of China. Besides innovation, the great emperor was also known to be obsessed with immortality and wished to conquer death. This fueled the fire according to which, he is said to have planned his burial and his mausoleum with the figurines that were intended to protect him in the afterlife. Scholars believe that one “longevity” elixir containing mercury might have contributed to his death. Today, the place is visited by history lovers and adventure junkies who are fascinated with the mysteries surrounded by the first emperor.

Cave of the Crystals, Mexico

The cave of the crystals (the Sistine Chapel of crystals) was accidentally discovered by two brothers while mining a tunnel beneath the Naica Mountain in Chihuahua, Mexico. The cave is the result of heating of groundwater (laced with calcium sulfate) from magma below the surface. The giant cavern is home to the towering slacks of selenite that makes human appears like a mouse. The crystals over time have seen a growth and the sharp tips, extreme temperature, hot magma makes touring the cavern a risky job.

The presence of microbial life forms in extreme temperatures and harsh conditions still amuse scientists today. These massive milky-white crystals are said to be more than 30 feet long and flooded with groundwater. This is why it’s dangerous to explore this unknown underground terrain. However, there are other ways to capture these crystals on your camera. You need not risk your life for it and still get to see what a beautiful sight it is.

Flowing underneath the St Paul Mountain range of Palawan island, Puerto Princesa is one of the longest navigable river caves in the world and a UNESCO world heritage site that attracts visitors from over the world round the year to capture its mesmerizing beauty on their camera. Stretching for over 24 KMs underneath the caverns of the mountains, the river boasts of rich yet complex ecosystem that had been adopted by the living organism residing in the river system for hundreds of years. When touring the place, don’t get stupefied by seeing crab-eating monkeys, monitor lizard roams the vicinity of the cave entrance. You can only explore a little part of the river as deeper parts cannot be explored owing to lox oxygen. The site is a full ‘mountain to sea’ ecosystem with rich biodiversity and some of the important forests of Asia. Traversing through the magnetic natural vibrancy of the river is certainly a dream come true to adventure junkies and nature lovers.

On the north island of New Zealand, lies one of most ethereal underground wonders on earth that will make you fall in love with the place again and again. So much so that you’d never want to leave the enchanting world the Waitomo glowworm caves offer. Discovered a century ago by a local Maori, and two English surveyors went on for the cave exploration. Little did they know that they would be bewildered by the twinkling glow of the ceiling giving imagination of standing underneath the clear blue sky with tons of stars sparkling. As they ventured further, they were astounded by the limestone formation taking all kinds of shapes and sizes.

These limestones comprised of fossils of corals, seashells, fish skeletons, and small marine organisms on the sea bed. The cave is known for twinkling natural phenomena caused by the presence of bioluminescent larvae in it that makes it glow and give it a surreal view. The water dripping from the ceiling gave rise to stalactites and stalagmites resulted in the deposition of limestone. Exploring Waitomo glowworm caves is certainly a must thing to do this year to make it all more rocking and fabulous.

Paris is a bustling city that boasts of its romantic air, luxurious lifestyle and phenomenal architectural wonders. However, the city of romance also houses a creepy yet interesting labyrinth in the very heart of it. The catacombs narrate time when the city’s cemeteries were overflowing with dead bodies and no space was left for more burials. It was decided that to accommodate more dead bodies, the cemeteries should be relocated. Hence, the catacombs (honeycomb tunnels) came into existence.

At first, the bones of the dead were deposited clumsily. Eventually, they were organized properly so that visitors could see the site conveniently. The catacombs of Paris are dark, depressive and eerie as you’ll never know the skull you’re looking at could be someone who died of plague or brutally murdered. No matter what, the site still receives a good amount of tourists throughout the year who are not sacred of such places.

Reed flute cave is a neon dream with colors spilled in every nook and corner of the cave. Reed flute got its name from a variety of abundant reed growing in the area used for making flutes. The interior of the cave is a gallery of gorgeously formed geographical formations. With extraordinary colorful stalactites and stalagmites, stone pillars and rock formation, Reed flute cave makes one feel like walking in the rainbow. There are more than 70 inscriptions of intellects (who visited the cave during Tang dynasty) embellished on the rock with ink.  The Karst Mountain, picturesque countryside of Guilin pulls tourists across the globe to take on an adventurous journey to the reed flute cave with legends surrounding them.

Skocjan caves are exceptional limestone caves comprising collapsed dolines, stalactites, stalagmites, waterfalls and underground chambers that are situated in the Karst region of Slovenia. When you get to the caverns where river Reka suddenly disappears into the Karst underground before passing through a spectacular channel with roaring rapids and waterfalls, you get the feeling as if you have landed into Lord of the Ring movie set. This millions years old cave holds importance both culturally and historically and are credited as UNESCO protected site. No wonder why the place is visited by tourists and adventure lovers from over the world. It is indeed one of the coolest underground wonders on earth that you must travel to this year.

All about Kolkata and its culture! Must Read!